According to the sources a ten member team of highway robbers stopped a Manipur bound night super bus bearing No. MN-01/1781 at Deopani Jengai and started robbing cash, ornaments, mobile handsets etc from the passengers. The santipur police on getting the information about the robbery immediately arrived at the spot and the robbers started firing at the police. Two robbers were killed in the shootout between the police and the robbers. Police recovered one pistol, three rounds of live cartridge and six numbers of mobile handsets from the arrested robbers. 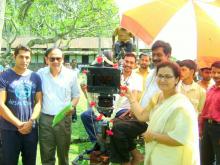 25 May 2012 - 12:02am | editor
Army GOC-in-C Eastern Command Lt Gen Bikram Singh on Wednesday called on Assam Chief Minister Tarun Gogoi as part of his farewell visit to the region. Singh, accompanied by his wife Bubbles Singh,...

28 Aug 2013 - 5:05pm | Subhamoy Bhattacharjee
Marking a significant milestone for conservation of Amur falcons in the northeast Indian state of Nagaland, three villages in Wokha district have pledged to save the migratory raptor in Doyang...