Journey with ‘Bard of Avon’ again. 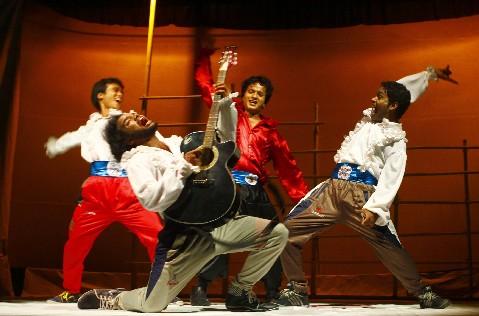 Nobody knows, when exactly Romeo born, when Juliet came into his life and how the greatest love story ever started. It is because of the fact that the history of English literature has not any reliable answer to the question: ‘when the "Bard of Avon" exactly penned the Romeo and Juliet?’ The Question becomes little bit tougher as whenever we saw it on stage, it looks fresh and relevant to our present scenario. It is really hard to find why we, the audience, weep silently for the tragic ending of the love pair again and again, even after knowing the story and watching it many times. Perhaps it’s the magical touch of the greatest English writer William Shakespeare, the Bard of Avon, which has made this play evergreen and heart-touching. 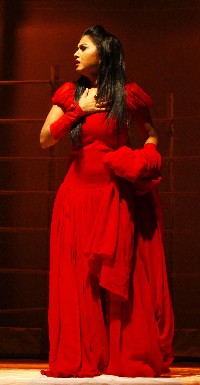 After quite a long gap, the Guwahatians got the privilege to meet Romeo and beautiful Juliet once again, wrapped up with some new thoughts and the needful modernisation. It was a evening of overwhelming welcome to the William Shakespeare’s excellent creation by the fully packed auditorium of Rabindra Bhawan. It was the eve of prestigious Natasurya Drama Festival, that took us back to the tragic love-life of Romeo and Juliet. First of all I would like thanks to Aimee Barua, popular cine-actor of the state, for taking the initiative of bringing once again the greatest tragic love story to the stage of Rabindra Bhawan with full enthusiasm and inspiration. The noted actor, who already carved a niche for herself in the cultural sphere of the state by her works in cinemas and mobile theatre as well, this time, took the initiative for staging an amateur drama. And for this, She recently formed her production house ‘Aimee Barua Production’ and jumped into the arena of amateur theatre. And eventually she decided to start the new journey with the golden piece of Shakespeare, the Romeo and Juliet. Another talented actor and drama activist Himangshu Prasad Das, the NSD graduate, who has brought out the essence of the play in that way that it could be staged here with limited resources and timing as well. He played the role of Romeo and directed the play too, while the elegant Aimee Barua enthralled the audience by her Juliet avatar. Both the lead actors have shown their immense talent and do justice to the epic characters to larger extent. It is because of the their outstanding performance that created a pin-drop-silence amidst of fully packed auditorium. The other characters of the play had been played by Khalinjyoti Bora, Apurba Barman, Dhiraj Mahanta, Niranjan Sarma, Sukdeb Nath, Bornali Bordoloi, Pallabi Barua, Sangita Barua, Sangita Kakati, Tagar Lota Das, Jyotiprasad Das, Dwipen Kalita, Samit Barman, Dhiraj Das, Munindra Das, Amal Thakuria, Bikul Bodo, Rupam Jan, Binod Das, Nilkamal etc. The other people behind this successful presentation of this drama are Pawan Mahanta and Dimpal Kumar Barua who were in-charge of stage decoration and light monitoring respectively.

It should be mentioned here that one of the most attractive part of this play, staged on 4th August, is the last scene in which the original playwright William Shakespeare himself comes on to the stage from the audience. The scene and the concept, added by the director himself, are really noteworthy as it makes the play more relevant to the present and provides the audience a new thought. Another important aspect of that evening is the overwhelming response of the audience. The huge gathering of people compelled the organizers and the troupe to stage another show and that is why there was two shows were being staged of the play. ‘It’s really a great experience. I was so tensed for this but finally our hard work got appreciation ’Says Aimee Barua, the producer and the red gown-claded Juliet of that evening . The actor cum producer also have a plan to stage the play in other parts of the state if any organiser comes forward. We hope the new journey of Aimee, has been started with William Shakespeare, will go on in coming days.

28 May 2012 - 12:57pm | Anup Biswas
The Dima Halam Daogah (Jewel) has sought suggestions and opinions on proposed Dima Hasao Territorial Council and its Memorandum of Settlement (MoS) from all section people living in Dima Hasao...

17 Feb 2012 - 3:16am | editor
Guwahati is gearing up to host the biggest ever Management Convention of Northeast. Courtesy Guwahati Management Association at the Royal Group of Institution campus at Betkuchi on Saturday. The...

A day with Papon
Gaane Ki Aane: The Real Zubeen on Screen
Not only Maharani, but the true ‘Avinetri’
Anup Baruah speaks through the lens…
Hengool Tales, Again to rock..!
Re-discover Zubeen in ‘Rishang’
Endhiran, the most expensive flick of India