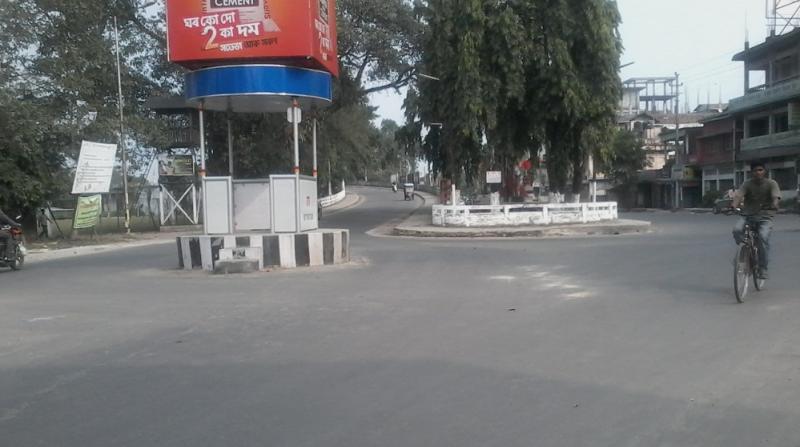 At a time when state police administration are  busy in receiving of ULFA’s founder general secretary Anup Chetia in Guwahati today after ending of CBI custody, normal life was paralyzed in Lower Assam districts including Kokrajhar, heart town of BTAD administration following the 12-hours statewide Assam bandh called by Six Community Aikhya Mancha pressurizing the government to accord Scheduled Tribe(ST) status to 6 ethnic communities of Assam. The manch have been demanding ST status to the six ethnic commmunities like Koch Rajbongsi,Adivasi,Motok,Moran,Chutia and Tai Ahom of Assam,yet governments have not been initiated any stern step to the demands.The Aikhya Mancha have been organizing several agitation and called state bandhs as well observed national highway blockade in the past occasion to put pressure the governments to the cause of ST status of six communities.

The bandh which was started from 5 AM this morning, was total in Lower Assam districts like Kokrajhar,Bongaigaon,Chirang,Baksa wore a deserted look during the bandh period. The Road transport communications along with National Highway were severely affected with vehicles remaining off the road. Business establishment like shops, markets, banks and educational establishment remained closed.

Konkon Jyoti Roy, All Koch Rajbongsi Students Union(AKRSU) leader said that the BJP led NDA and Congress led previous UPA government have been tactically delayed the issues of grating ST status to six ethnic communities in Assam. He has warned for a strong mass agitation programmes said, “If the government fails to accord ST status then the mancha will not allow BJP to come to power in the election.”

The ‘Empowered Women’ of Assam

7 Jan 2017 - 12:56pm | Maulee Senapati
Any mention of India’s Northeast, and the first two things that comes to the mind of people from outside the region which has been a wonderful cauldron of cultures are, a disturbed area battered for...

28 Nov 2014 - 1:47pm | Rajiv Roy
The increasingly bigger role of the “Third Space” in every economic sphere will be richly explored in a 2-day conference titled “India’s North Eastern States and Eastern Neighbors:  Engaging for...

Narrow escape from explosion in Guwahati

2 May 2018 - 5:05pm | AT News
GUWAHATI: After a brief spell, Guwahati had a narrow escape from a devastating explosion when security forces seized a powerful bomb from a bus in the city. Acting on a tip off, the security forces...