24 Mar 2010 - 9:13pm | Mowsam Hazarika
The Indian military has a new weapon against terrorism: the world's hottest chili. After conducting tests, the military has decided to use the thumb-sized "bhot jolokia" to make tear gas-like hand... 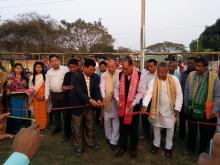 29 Nov 2013 - 11:37pm | Saidul Khan
Tura Municipal Board (TMB) is overlooking fact and is set to inaugurate its newly constructed Marketing Hub in Ringre, which is a premier market site in Tura town. After much hiccups, the Marketing...