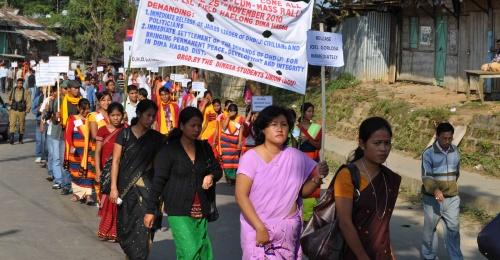 Demanding expeditious peace settlement of the demands of the Dima Halam Daogah (Joel) as per the Proposals for Peace Agreement submitted to the Government and the release of all jailed leaders of the DHD(J) including Politicians and Civilians associated with their struggle immediately from the judicial custody in order to facilitate free and fair negotiation with the Government appointed Interlocutor and Representatives for smooth sailing of the peace process as well as to have consensus with the community leaders, NGOs and public representatives, the Dimasa Students’ Union organised a Grand Meeting Cum Rally at Town Committee Field (Lal field) Haflong today.

In this connection, a well attended meeting was also held with Sri Kebaron Naiding, President, DSU in the chair at Lal field wherein representatives from all most all the front liner NGOs of Dim Hasao attended.

Attending the meeting Sri Dethang Naiding, President, Jadikhe Naisho Hosom, Dimasa Apex Body, Samarjit Haflongbar, former CEM, DHAC, L. K. Nunisa,Genl. Secretary JNH, Rathindra Thaosen, President, ASDC, opine that for the all round development of Dima Hasao, the demand of DHD(J) should be solved immediately. Sri David Dimasa, Home Secretary, DHD(J) and Sri Daniel Dimasa, Deputy C-in-C, DHD(J) assured all the people of the district of Dima Hasao that if their demands were fulfilled then all the people living in the district would be benefited. There will be no discrimination and will enjoy the same as they were enjoying since 1952.

Thousands of people took out a procession from Lal fiels marched upto Council rotary then back to the Office of the Deputy Commissioner, Dima Hasao and submited a memorandum to the Chairperson, UPA, Smt Sonia Gandhi through the DC, Dima Hasao, requesting her for sympathetic action while enlisting their grievances and sufferings.

The memorandum stated that after years of armed struggle for safeguarding the socio-economic and political concerns and rights of the tribal people of the Dima Hasao District in Assam, the Dima Halam Daogah (Joel), an insurgent group operating mainly in the said district, came out for peace process after the Government gave them a positive signal for peaceful negotiated settlement of their demands and concerns.

It may be mentioned here that the DHD(J) was the first armed insurgent group in the North East India to have come out for peace process by surrendering its arms en-mass on 2nd October 2009 at the Dima Hasao Sports Association playground, Haflong in the august presence of Shri Tarun Gogoi, Hon'ble Chief Minister of Assam. The general public of the Dima Hasao District had wholeheartedly welcomed the return of peace and hoped that there would be positive outcome in the peace process which would ultimately usher in an era of permanent peace, stability, development and progress in the district.

They highly appreciated the initiative taken by the UPA Government, particularly Hon'ble Union Home Minister Shri P Chidambaram for smooth passage of peace process by appointing Shri P C Haldar as the Interlocutor. Since then, there have been a series of informal talks between the DHD(J) leadership and Shri P C Haldar, to discuss the various demands and concerns raised by the DHD(J). In the meantime, the DHD(J) has also submitted Proposals for Peace Agreement to the Government for consideration and approval. However, the peace process seems to be moving on slow pace which is baffling the rank and file of the DHD(J) in particular and the people of the Dima Hasao district in general. Moreover, since the top-rung of the DHD(J) leadership is in jail, how can the peace process be moved forward to its logical conclusion? It is argued. Before the final peace settlement, it is imperative that the DHD(J) leadership should have few formal talks with the Government to discuss and negotiate on the Proposals for Peace Accord and hence, before the start of the formal talks, all top-rung of the DHD(J) leadership along with politicians and civilians associated with their struggle should be released from jail in order to facilitate free and fair negotiation with the Government appointed Interlocutor and Representatives for smooth sailing of the peace process as well as to have consensus with the community leaders, NGOs and public representatives before signig the final peace accord, the memorandum concluded.

5 Feb 2018 - 6:15pm | AT News
GUWAHATI: The policemen probing the sensation abduction of a Guwahati school boy are believed to have been interrogating a youth in this connection. Sources say in Guwahati that a team of senior CID...

3 Feb 2014 - 8:45pm | AT News
Congress vice president Rahul Gandhi on Monday assured the north east people in New Delhi of help from his part to ensure their safety and security in the national.Gandhi, who visited the agitating...

25 Oct 2011 - 9:19pm | editor
A six member delegation of the United Liberation Front of Asom discussed its charter of demands with the Centre in yet another crucial rounds of talks on Tuesday. Led by chairman Arabinda Rajkhowa,...