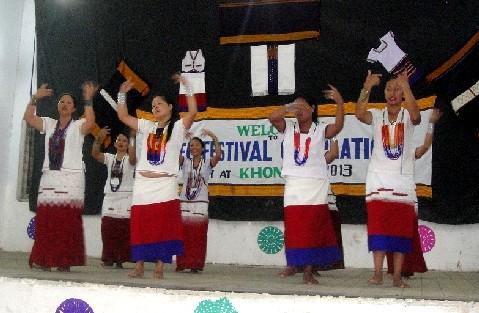 Dree, the most important festival of the most advanced tribe of Arunachal Pradesh, the Apatanis, travelled hundreds of miles from the main hub of its celebrations, Ziro and Itanagar to reach insurgency-infested Tirap district, crossing hills, mountains, deep valleys, rivers and numerous rivulets. Along with the rest of the Apatanis, Dree was celebrated at Khonsa with gaiety and fanfare.

Speaking on the festive occasion as the chief guest Khonsa ADC H. Matcha said that the Dree festival celebration at Khonsa reminded him of the mega Dree celebrations he had attended at Ziro in the past and urged the Apatanis to spare no efforts in preserving their rich culture. Matcha said that all the festivals in Arunachal were related to agriculture and well-being of all human beings and animals adding that festivals fostered  love, happiness and peace. Participating in the festival as guest of honour Tirap SP Vikramjit Singh while greeting the participants appreciated the various dances performed by representatives of all the tribes. The President of the festival committee read out the Mythology associated with Dree. Prizes to the dance groups were distributed by the Chief guest and the guest of honour.The day-long programme was marked by dances from all tribes and a grand community feast with Piikey as the special delicacy.

19 Nov 2014 - 9:33pm | AT News
Chief minister Tarun Gogoi met Governor JB Patnaik at the Raj Bhawan on Wednesday amid speculation of his preparedness to reshuffle his cabinet.  Gogoi arrived in the Raj Bhawan at around 6...