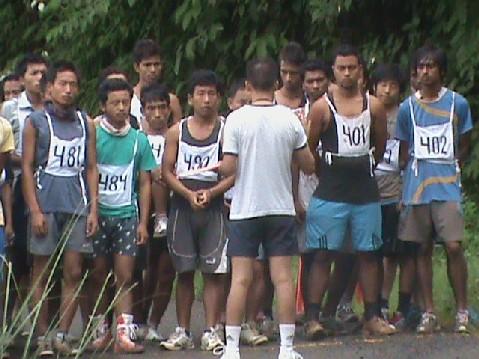 The Indo-Tibetan Border Police (ITBP) Recruitment Rally for Tirap and Changlang districts of Arunachal Pradesh brought in to Khonsa at the personal initiative of Dr. Sachin Shinde, IAS, the then Deputy Commissioner Khonsa was successfully conducted at Khonsa from July 3-7. A huge response from the youth due to meticulous decimation of Recruitment Rally information by the TDCCC and a month long physical training by the ITBP resulted to the selection of 189 candidates from Tirap for written test at Changlang to be held on July 12. The ITBP team under the presiding officer and 2 i/C Shri. T.S Mangang assisted by 5 officers and other support staff profusely thanked Shri. Kamlesh Kr. Joshi , IAS, DC, Khonsa and his team of  officers, the TDCCC and all concern for the logistic support received by the ITBP. Kamlesh Kr. Joshi, IAS, DC Khonsa is evolving a finer mechanism for conduct of another Recruitment Rally at Khonsa in coming August 2013.

6 Jul 2014 - 8:25am | AT News
MRIDUSMITA DAS, BARPETA Cases of Japanese encephalitis refuse to die down in Barpeta. Yet another patient lost his life in the district creating panic among the people of all walks of life....

5 Jun 2018 - 8:53pm | Akshaya Pranab Kalita
Namrup: Today all over the world is facing natural  calamities due to  cutting of green lands  and making buildings, sky towers. Here  in Namrup the World Environmental Day is...

9 Jan 2020 - 6:09pm | AT News
Guwahati: City based Journalist fraternity on Thursday appealed to the Assam government for launching a scheme to support the bereaved families of working journalists of the state who died on duty...