Kamlesh Joshi, IAS has joined as the Deputy Commissioner of insurgency-hit Tirap district in Arunachal Pradesh on June 24. He took charges from Ms Shilpa Shinde, IAS, Deputy Commissioner, Longding who was holding the additional charges of Tirap district. Prior to his joining at Khonsa, Joshi was serving as the ADC of Namsai in Lohit district. This is his first posting as DC.

The people of Tirap district have whole-heartedly welcomed the new DC  and hoped that the new incumbent Deputy Commissioner would carry forward the new and innovative ventures initiated by former Tirap DC Sachin Shinde, especially, TDCCC, rain water harvesting and other beneficial schemes. 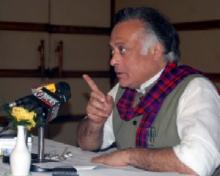 25 Nov 2007 - 9:05am | editor
The historic Stillwell Road may be reopened by the Centre if the security related aspects are found to be in order.Disclosing this on Monday morning, Union commerce minister Jairam Ramesh said...

10 Oct 2015 - 7:20am | AT News
Civil society organizations both from Assam and Nagaland at a conclave in Guwahati on Friday have agreed to help the two north eastern states restore age old trust and bonhomie. Amid trouble and...