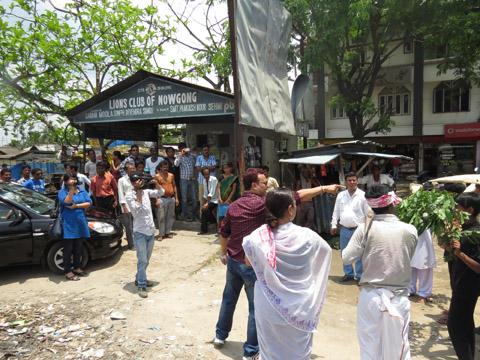 Two nature conservation NGOs of Assam, Aaranyak and Green Guard Nature Organization (IBCN partners) collaborated to organize 'street plays' at several places in the towns of Morigaon and Nagaon to promote conservation awareness of the Globally Threatened Greater Adjutant Stork (GAS) on 26th of May. Locally known as Hargila, the world's most threatened stork with an estimated global population of less than 1000 birds has major breeding colonies in these two towns in central Assam. The two NGOs had earlier collaborated on a very successful project for the rescue, rearing and rehabilitation of injured, sick & fallen Greater Adjutant nestlings at Nagaon from 2001-2004, under financial support of the US Fish & Wildlife Service.

The play 'Adhikar', scripted by Purnima Devi Barman of Aaranyak and directed by Pabitra Kalita of Green Guard, was staged at Natun Bazar, Morigaon Syndicate, Lakhinagar Chariali and Senchowa in Nagaon and at Chariali and Rajagaon (2 places) in Morigaon. At two places, once each near a Greater Adjutant nesting colony of Nagaon and Morigaon, villagers, including elders, women and children were offering traditional afternoon prayers (Naam) at the Naamghar (prayer hall) and promised to ensure conservation of the bird by all means. At another location, it was the turn of teams and officials involved in a cricket match to be inspired during the innings break. The success of the initiative can be measured by the number of people who not only witnessed the street plays in blistering heat, but also lined up to sign the banner in support of Greater Adjutant conservation. 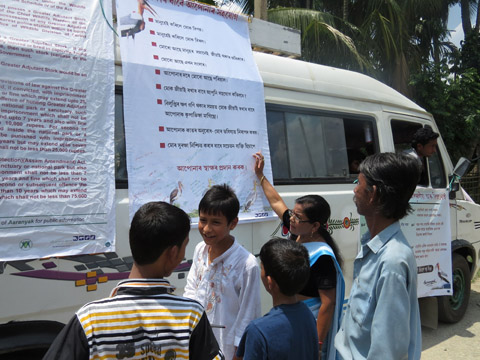 The play dwelt on the role of Greater Adjutants in keeping the environment clean and free from pollution. It starts off with an angry man trying to cut down a nesting tree with two frightened nestlings and a helpless mother perched on a nest at the top, alleging the birds dirtied his neighborhood. He is restrained by his wife who points out the presence of chicks but the man is determined to take the tree down, and along with it, the Greater Adjutant family. The situation is saved by the arrival of some enlightened persons who give the man a lesson about the ecological importance and global status of the Greater Adjutant and tells him to feel proud for hosting the birds on his tree. The offender is remorseful and the play ends with an appeal by all the characters to help conserve the Greater Adjutant Stork.

Dear sir we work on children

30 Sep 2014 - 10:38pm | AT News
Amid much fanfare and traditional religious fervor, Durga puja festival got underway on Tuesday. The idol of the goddess of strength was formally installed at the alter at 9-30 in the evening...