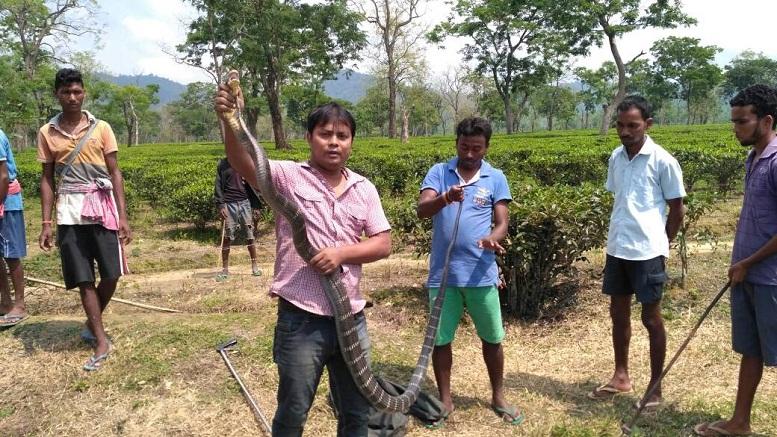 A King Cobra was rescued from the premises of the Jiajuri Tea Factory near Nagaon today by Green Guard Nature Organization rescue specialist Dulu Bora. The very aggressive snake had reportedly charged at a group of female leaf pickers, following which some men had been summoned to kill it. The arrival of Dulu saved the King from being bludgeoned to death, and perhaps being eaten, as there are people in that area who are not adverse to eating even venomous reptiles! Later, forest personnel including the Chapanala Beat Officer accompanied Dulu to release the King at an uninhabited wilderness about 5 kms from the place of rescue. Dulu mentioned before the media contingent that this specimen of the world's largest venomous reptile was the most aggressive of the one dozen King Cobras he had rescued and rehabilitated back to the wilderness. A Sanctuary Wildlife Service Award Winner in 2014, Dulu has rehabilitated over a thousand wild animals, including more than five hundred snakes since 2004.

7 Jul 2014 - 10:40pm | AT News
Chief Minister Tarun Gogoi raised a number of issues confronting the state as he met prime minister Narendra Modi in New Delhi on Monday.   Talking to reporters after the meeting, Gogoi...

24 Feb 2014 - 11:56am | AT News
Akhil Gogoi seems to have landed in trouble. Kamrup (Metro) district administration is believed to have been prepared to arrest the KMSS president charging him with fuelling the situation where one...