In the wake of the Sharadha Chit Fund Scam, the Golaghat dist. Administration today raided and sealed 09 (Nine) nos of fake financial companies. Three persons have been arrested in this connection so far. In a press meet called by dist administration today at the conference hall of Deputy Commissioner’s office, the ADC Krishna Barua informed that raid against 12 (twelve) nos of fake financial companies had been carried out so far including today’s raid. She further informed that so cause notices had been issued to 17 (Seventeen) such companies out of which 12 companies had been sealed for not providing satisfactory evidence and an FIR has been lodged under the Assam Protection of Interest of Depositors in Financial Establishments Amendment Bill, 2013. The dist administration had also introduced a helpline number (9864043743) in which the public can lodge their complaint against any anomalies of financial companies. The dist. administration is also geared up to launch a series of awareness campaign to spread awareness among the public against fake financial companies that tend to lure investors with lucrative deal. The companies which were sealed so far include Golden Touch Financial Service, Golden Enterprise, GTFS, Sharada Insurance Consultancy, Golden Multi Service Club Ltd., Housing & Housing Society & Micro Finance, Bandhan, Prayag Group, Tower InfoTech, Basil International Ltd. , Orchid International Ltd. and Height Insurance Service.

9 Jun 2013 - 1:35pm | Jayanta Kumar Das
In a tragic incident wild elephants killed two people at Coramore on June 8. According to information two strayed wild elephants had been roaming in and around Coramore area for two days. Yesterday... 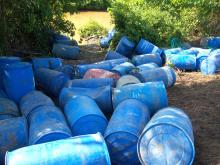