Ratan Lahkar out of danger 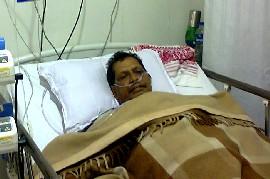 Health condition of renowned theatre personality and the producer of popular mobile theatre group ‘Kohinoor’ Ratan Lahkar is out of danger according to the doctors attending him on Thursday. The 72 year old artiste who is being treated at the Guwahati based Hayat Hospital is suffering from heart-related illness for quite some time. He was admitted in the hospital on Wednesday after he complained of breathing problem.

Doctors attending Lahkar at the hospital said that he would be shifted to the general cabin from Intensive Care Unit (ICU) within next two days if his health keeps improving at the same pace. It is noteworthy that Lahkar was also admitted in another private hospital of Guwahati a few days back.

30 May 2013 - 10:20pm | AT News
Jails in Assam will soon take the yoga route to reform prisoners. Yoga practice will develop the physical, mental, spiritual and social health of prisoners; moreover it will make them forget the pain...

Koch-Rajbongshi organizations up in arms against self-styled leader

28 Jul 2019 - 8:30am | Shajid Khan
Putting an end to all controversies surrounding the President of Udalguri west chapter,All Koch Rajbongshi Students' Union (AKRSU), Hemanta Bora Koch regarding his affilation to Koch-Rajbongshi...

23 Sep 2008 - 2:14pm | editor
The Assamese Students Association Delhi (ASAD) will provide medicines and other amenities to those caught in the brimful misery in the time of flood in Assam.In a statement ASAD president Kumar...