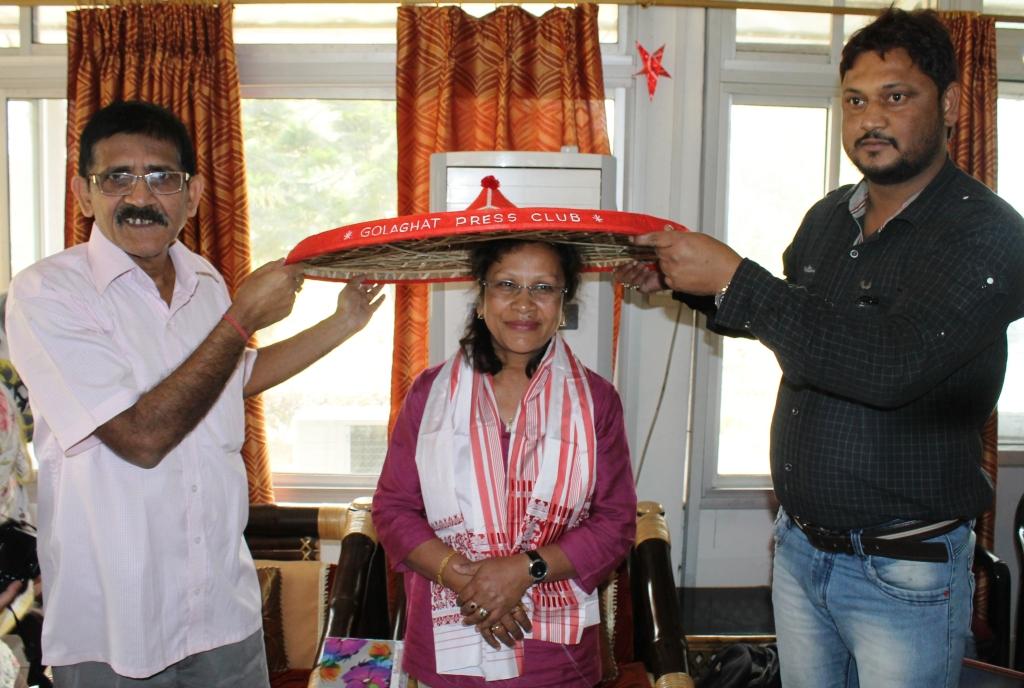 Even though the pages of news papers have increased now a days, we are still missing out on developmental and positive news and it is very unfortunate that now news finds us, we do not find news, said Patricia Mukhim, the Padmashri award winning journalist and editor of Shillong Times during her interaction with media of Golaghat. Mukhim who is also a member of the National Security Advisory Board and National Foundation for Communal Harmony, under Ministry of Home Affairs was this month’s guest for Golaghat Press Club’s Meet The Press Programme. She also expressed the need of a common platform for the journalists of the north east region to share and express their views.  She was later felicitated by members of press club. Sanjib Gohain Baruah, Deputy Commissioner of Golaghat was also present on the occasion.

Mukhim was accompanied by Dr. Aloke Thakore of JM Foundation for Excellence in Journalism, Mumbai along with Sonia, Jyoti Shinoli and Parth M N of Mumbai and Shah Ifat Gazia of Kashmir, all are students of journalism visiting Assam and Nagaland for Conflict Reporting. While asked about their experiences in Assam, the students said that it was an enriching experience for them but at the same time expressed their anguish that North-east and its problems never find the importance they deserve in the national media and it is only after visiting the violence ridden Bodo belt they have come to know about the ethnic clashes that took place last year. Gazia, who hails from Srinagar valley in Kashmir shared similar view saying that the situation is quite alike in Assam and J&K where the common people are victimized on account of the ongoing clashes between the security forces and insurgents and as also the people of both the state are reeling under the draconian AFSPA and so can easily relate to the problems of the Assamese people. It is to be noted that Gazia and her three friends revisited the murder of an eight-year-old boy, Sameer Rah, who was killed on August 2, 2010 during Kashmir's when protesters clashed with police and CRPF on the streets, in her 20 minute documentary film “Long Ago I Died”

15 Dec 2007 - 4:36am | editor
The injured Asom Gana parishad MLA Padma Hazarika has been shifted to the Guwahati Neurological Research Centre on Saturday morning. According to information, doctors here say the legislator from...