The “GIFA” and the ”STARDUST AWARD” winner Zubeen Garg is ready to show his talent in America. He is to start his journey on 29th of June , 2007 to a place called Merryland, near Washington. He will be performing at a Cultural Event of the Assamese people living there. The event is being organized for three days and the Chief Minister of Assam, Mr. Tarun Gogoi is also expected to be a guest of honour on the 1st of July 2007. 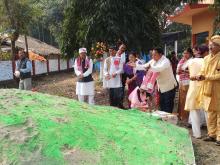 Gaiety of Me Dam Me Fi

31 Jan 2018 - 11:27am | AT News
GUWAHATI:Assam celebrates Me Dam Me Fi marking the homage to the Ahom forefathers with traditional Tai religious fervour across the state on Wednesday. The celebration started from early in the...

3 May 2015 - 8:12am | AT News
Security forces claimed to have killed a top militant at an encounter the along Assam-Meghalaya on Sunday. The gunbattle took place during a joint operation by police and para military forces at...