The bright and the brilliant students or the toppers of the state of HSLC and HSSLC examination 2006-07 were felicitated by AASU on 14th June,07 at Rabindra Bhawan, Guwahati. As many as 125 toppers from 90 different institutions were honored at the function Farhana Anjuman Hassan from Don Bosco High School, Jorhat has secured the 1st position in HSLC 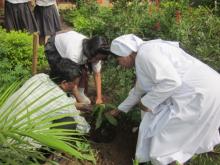 7 Jun 2014 - 8:17am | Harsha Hazarika
The Assam and Arunachal Pradesh State Office (AAPSO) of WWF-India, planted tree saplings in several schools of Guwahati and other districts of Assam on the occasion of the World Environment Day (WED...