After the famous “Ambubachi Mela” came to an end in Kamakhya, 17 of its devotees got unwell due to unhygienic food consumed there. The Guwahati Police and the Guwahati Municipality board have taken responsibility for the incident and admitted the patients at The Guwahati Medical College immediately.

Doctors commented that due to improper foods being consumed during the Mela, the patients feel seriously ill. Ironically, most of these devotees who feel ill had consumed liquor on the previous night and this also added to their problem 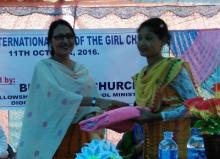 14 Sep 2009 - 12:56am | jyotiprasad_das
Far too many years have been wasted and resources drained in heated debates and discussions, fruitless proposals and policies, discredited committees and campaigns in delivering on the vexed problems...