At a time when a lot of concern has been displayed from several indigenous organizations of the state regarding the incessant killing of one horn Rhino and presence of a large number of suspected Bangladeshi migrant that has started to threaten the very existence of Kaziranga National Park (KNP) one of the oldest protected areas in the world and Assam’s pride and identity. But ironically the state govt. blatantly denied the issue as baseless rumour and even conspired to provide safeguards to them. This serious allegation has been leveled by Mrinal Kumar Saikia, Adviser of Hindu Yuva Chatra Parishad and former president of BJP Golaghat unit, while addressing a press meet held today at Golaghat district journalist association’s office.

Addressing the media persons, Saikia alleged that the government in order to protect the suspected Bangladeshi migrants of Sixth Addition area of KNP, has tried to project the settlers residing in the 2nd, 3rd and 5th Addition of KNP as encroachers whereas these people are rightful settlers having their own land pattas and some pattas even date back to 1960 and when these rightful settlers will demand the right to live then the government very strategically provide them recognition alongwith the encroachers of the 6thAddition.

Saikia further said that the government had been misleading the honourable court and it has been proved in the Affidavit filed by the state government whereas it is stated that the settlement process is yet to be completed in 2nd, 3rd, 5th and 6th addition area and once the settlement is completed these areas will be handed over to KNP authorities but at the same time Collector’s Report enclosed with the affidavit tells a different story. The Collector’s Report (HMC/HE/Forest/Enquiry/2009 dt. 25-02-2010) which has been submitted by H.M. Cairae, Additional Chief Secretary of Education Department and Collector for the 6th Addition of KNP, to the Commissioner & Secretary to the Govt. of Assam stated that nobody has any title or right in 6th Addition area’s land and government may issue the final notification for the constitution of the National Park.

Saikia while pointing his accusing finger towards the government said that the frequent poaching of Rhinos is mostly carried out by encroachers of 6th Addition area which comprised of 40150 Hectares of land and falls under Sonitpur district.  Even the forest department officials hesitate to enter the dwelling place of 6th Addition encroachers, Saikia further alleged. It is to be noted that Mrinal Kumar Saikia has filed a Public Interest Litigation (PIL) in the Gauhati High Court on 4th October last year regarding the encroachment by suspected Bangladeshi migrants in the Sixth Addition Area of Kaziranga National Park and its vicinity. After going through the PIL (No.67/2012), a division bench comprising Chief Justice A K Goel and Justice N. Kotiswar Singh has directed the state government on 8th January to take steps to free the areas proposed to be handed over to KNP from encroachment within three months time.

2 Mar 2011 - 12:34pm | editor
The Centre has approved prosecution of an engineer in connection with the multi crore scam. According to home ministry sources, NIA probing the terror funding cases in NC Hills gets green signal to... 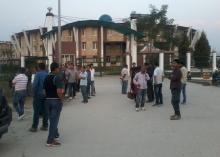