30 Nov 2015 - 12:28pm | Suresh
An Ex service men (ESM ) rally will be conducted at Likabali Military Station on December 11. The rally is being organized under aegis of Fifty Six Infantry Division. Ex-servicemen, Veer Naris,...

4 Mar 2012 - 3:37am | editor
The Board of Secondary Education, Assam on Saturday revised the schedule for the on gong HSLC examination hours after the question paper anomalies in Nalbari district. In a statement, the Board... 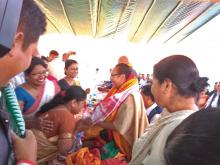