Five people died three others have been injured at a tragic accident at Dibrugarh district's Kutuha area on Sunday morning.

According to information, the accident took place in Kutuha near Barbaruah when a Maturi Van bearing No AS506-F-3086 carrying eight people on its way to Moranhat had a head on collision with a Dibrugarh bound bus No AS-01 Q 2225.

These five people died on the spot.

The two injured people have been rushed to the Assam Medical College Hospital, Dibrugarh.

6 Sep 2015 - 3:47pm | editor
A NDFB-S rebel identified as Buddhiram Basumatary alias Birkw of Amteka Debrabil in Chirang district was apprehanded from Karigaon area in Kokrajhar by security forces belonging to the Army on... 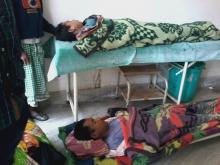