Sixteen senior journalists from Guwahati have jointly signed a petition to appeal to the people of Assam to celebrate the 60th anniversary of our Independence Day on August 15 in a befitting manner ignoring the threats that have come from certain quarters.

The petition which is also circulated on the internet further says that we believe that we, the people of the state have every right to celebrate the day, as we have inherited the spirit of the freedom fighters who had made immense sacrifices and a good number of whom, like Kushal Konwar and Kanaklata, had even laid down their lives to free the country from the clutches of colonial rulers.

The Independence Day this time has an added significance as it coincides with the birth centenary celebrations of martyr Bhagat Singh, the petition said.

The journalists appealed to the people of the sate to hoist the national tricolour on the day atop their houses and also to organize community celebrations in their respective localities saying the national flag would also be hoisted at the Guwahati Press Club campus at 11 a.m. 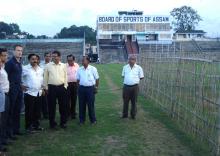 24 Sep 2008 - 1:54am | Nanda Kirati Dewan
The England and the Wales Cricket Board (ECB) is not happy with the itinerary of its November-December tour to India, released by the Board of Control for Cricket in India (BCCI) despite that top...