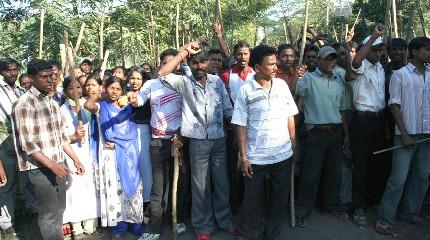 The 36-hour bandh called by All Adivasi Students' Association (AASA) has paralysed the normal life of Nagaon district completely. Places like Kaliabar, Samaguri, Kathiatali, Amsoi, Nelli wore a desolate look and the bandh supporters damaged a number of vehicles pelting stones in those places. The supporters burnt a luxurious car at Kathiatali on Monday. They also damaged business establishments in those areas.The Bandh hits functioning of nationalized bank branches in those places. Attendance in government offices was thin and no passenger vehicles including long distances night service buses were seen on NH-37 between Guwahati and Nagaon.

The Bandh supporters physically assaulted NSUI State president Bibhuti Bhusan Borthakur at Gopal krishna Tea garden bus stopage near Nelli on Monday on his way to Guwahati from Nagaon and damaged his vehicle.

Meanwhile, police and security personnel brought the places under control and no major incident has been reported. 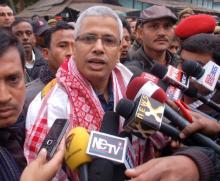 26 Nov 2014 - 6:50pm | Hantigiri Narzary
She is Renuka Hembrom. The teen aged girl was missing from July. But she is back to home. Courtesy Nedan Foundation. The Kokrajhar-based non government organization managed to rescue Renuka on Monday...

22 Jul 2014 - 7:51am | AT News
The dissident ministers and MLAs are running the risk of stern action from the party high command. State Congress committee on Monday has urged the AICC to take stern action against outgoing...