Three persons were killed and ten others injured in a head-on collision between bus and a passenger Sawari at Solmari-Kalyanpur under Agia police station in Goalpara district on the Goalpara-Agia road at about 3 pm today.The accident occurred when 'Maa Taara', a speedy passenger bus (AS 19C-0699) from Goalpara on its way to Bongaigaon tried to overtake another vehicle, rammed into a Sawari passenger vehicle (AS01 AC-2109) plying from the opposite direction. After the collision one of injured died on the spot, while the other two succumbed to their injuries at Goalpara Civil Hospital. The deceased have been identified as Moijuddin (22) of Baguan-Ambari, the driver of Mahendra Sawari, Safikul Islam (35) of Rakhaldubi and Abdul Barek (72) of Baguan. Other ten injured persons were shifted to Goalpara Civil Hospital. Out of them five persons are stated to be critical.

25 Jan 2014 - 3:53pm | AT News
Assam Congress will soon announce the candidates for the upcoming Rajya Sabha polls in a day or two.Disclosing this chief minister Tarun Gogoi told reporters on Saturday that the ruling party has... 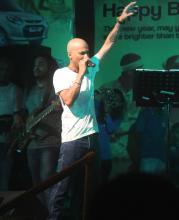 11 May 2008 - 2:59am | Nava Thakuria
Guwahati Press Club has decided to study the problem of garbage management in the largest city of Northeast with special reference to bio-medical wastes. This is a known fact that Guwahati, the...