Two persons died and three others injured in a road mishap when a speeding truck hit another loaded truck parked on the roadside of NH37 at Daranggiri in Goalpara district on Saturday morning. Sources said that the truck (AR 09A/2853), heading towards Guwahati, hit another parked truck (WB 73B/8257) at around 4.00 am. The collision was so powerful that the parked truck was turned over roadside and the other truck hit a house neasrby the spot. One of the deceased was identified as Atowar Rahman, the driver of the parked truck, but the other is yet to be identified. Police said that the driver of the hitting truck escaped immediately after the accident took place. 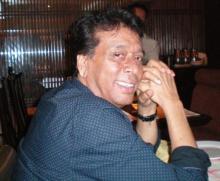 26 Feb 2014 - 3:43pm | AT News
Noted film actor Biju Phukan joined Trinamool Congress in presence of Mamata Banerjee at a function in Guwahati on Wednesday.Phukan, who once contested the assembly polls from AGP told the TMC boss...