In yet another bizarre incident that runs into a hail of surprise, a magistrate was arrested when he was trying to bribe KMSS leader Akhil Gogoi on Tuesday.

Police arrested Golaghat district additional deputy commissioner Anamuddin Ahmed in Jorhat when he approach Gogoi with Rs 5 lakh in cash as bribe at around 8-30 in the evening.

Gogoi, who refused to accept the amount as bribe informed the police who later rushed to the spot and arrested the magistrate.

22 Oct 2014 - 9:00pm | Hantigiri Narzary
One person died and atleast15 others have taken ill after they consumed food served at a wedding party in Kokrajhar district on Wednesday.According to information, Sainudding Sheik from Bhawraguri... 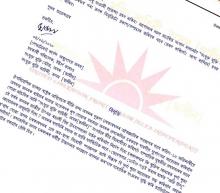 4 Sep 2020 - 10:31am | AT News
Guwahati: The United Liberation Front of Asom (ULFA-1) has strongly opposed the government’s permission to observe Durga puja during the endemic period and called it an attempt to appease the Hindus...