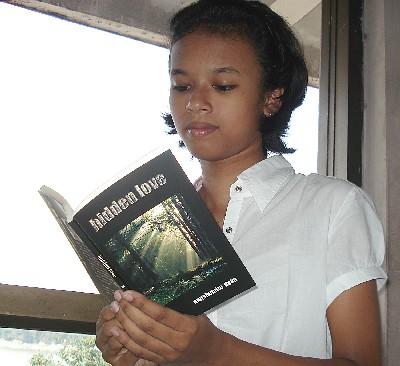 Its not only the blasts and killings that reigned the state but we still hope that good things always not need to be worried in the distress too, like the pen of a young girl, Angshumita Deka. She is cute, energetic and ambitious too. Pining to become an Astronautic individual this girl makes her identity only in this tender years today when she gets her first novel "Hidden Love" released today. She is a student of Holychild school in class VIII and with everyone’s' expectation she is smiling with her book in the stands today. "Its wonderful and unbelievable that she managed to do it so early”, says her classmates in union with cheering her up. She is a teen and she decided to write on a hilarious and true fiction on the controversial "Witch Craft", a custom that led many stories from history to many Haunting killings of innocents.

Assam, with its other sister states is always been a kingdom of the magicians who came from the Himalayas to worship their Gods and Demons in this land. The Assam history depicts many a stories on their practices in the Ahom dynasty and the reminiscence of those customs is still prevails in this soil in places like Mayong, Nagaon, Dhubri and many where people believes in the spiritual powers of the unseen on mankind. Many females and babies been buried live in this region as Witches and Devil sons with the mysterious notions to protect the civilization from the evils in a bloodshed way. And this small girl has picked her topic on such a controversial theme while she is only in her teens.

"I have read about killings of innocents in the remote areas as allegedly taken to be Witches and their worshipers. Many kids got disappear in the name of sacrificing to the Demons to empower the powers to its deliverer. I firmly believe this should be stopped", states Angshumita in her firm voice while adding that she believes the practice of the Witch craft is a misbelieve rather than a power gathering source from the eternity. Many of my ages been taken as the victims to this and the civilization should take care of it through the proper education and information.

Its been the first time that the militancy land is witnessing the budding Angsumita to release a book in the international language in so tender years. She has made this effort to start the revolution in the writing fraternity to make the boundary larger from regional to international limits. "The educational system is also to be blamed in this region for not to produce such instances of making a good Novelists and writers at all. The society and the system have always prevailed with rigid ideas to make the generations to flourish. But the time needs to change is here where Angshumita making the first roar with her cute fingers to roll on as a novelist in her 13", says Kanak Sen Deka, the president of Asom Sahitya Sabha on her book.

The ideas need to change to make someone encourage to do their wills, expressed Angshumita while she wishes to fly in the gown of NASA, but desperately wants her land Assam to make higher in global map with her capability and dreams with her continuous venture in writings. "I want to explore myself with everything in my limits but it needs a great support from your surroundings and it can be done by anybody who has the will and potential, it only needs an environment and courage to fight with odds". Angshumita is also optimistic in her views to this soil as she thinks that the militancy will be overcome with only courage and everyone’s' will to change it to better.

Permalink Submitted by SIMANTIK DOWERAH on Mon, 14/01/2008 - 12:05
Wow Angshumita! Bravo! That's my first reaction. It is undoubtedly a feat to be achieved in such a tender age. The topic on which the novel dwells upon is an intriguing one. Pranjal Baruah did well by giving us an opportunity to know about Angshumita. But I would have liked more if he had given information on the publishing house, cost, number of pages etc. Yours truly, Simantik Dowerah HT Media New Delhi - 110 001

24 Dec 2014 - 5:45pm | Hantigiri Narzary
The All Assam Adivasi Students Union on Wednesday blocked the railway in Gossaigaon in protest against the NDFB-S carnage in Kokrajhar and Sonitpur on Tuesday.Hundreds of Adivasi people squatted on...