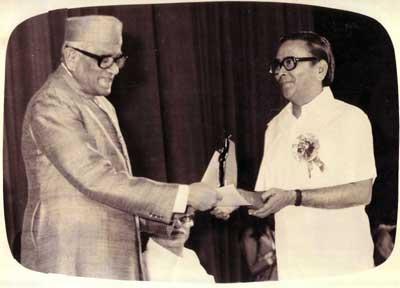 Dr. Bhabendranath Saikia is in simple language a legend in Assam whose stories writings and films have left an indelible mark not only in Assamese society for the past four decades but the world over. Authenticity was his signature theme, the hallmark of a genius credited with putting Assamese films well and truly on the national scene.

Dr. Bhabendranath Saikia, the man with a indigenous career that dominated the creative spheres of Assam for a good number of year bid adieu to his mortal world three years ago 13.08.2003. He was born on 20th February, 1932 in Nowgaon district. He obtained his Ph.D in Nuclear Physics from London University. From studying Physics in Cotton College he moved to becoming a Reader at Gauhati University, where he picked up his interest in film making. He would have a glorious life abroad but the artist, the writer in him brought the maestro back to Assam to render services for the upliftment of Assamese culture.

He is considered one of the greatest Assamese of the 20th Century whose life began in a non despict locality in Nowgaon town before he become famous through his work.

He followed the normal cause of a commoner as a child. He was perhaps baffled by the mystery and illusion unfolded by the nature and behaviour of his penniless father, whom he described in his autobiography "Jiwan Britta" (life circle) as one who was in the habit of fleeing his home on various occasions, the reason for that discovered later was nothing but poverty. What a long, sometimes heart breaking always arduous road he trod to reach the pinnacle that he ultimately scaled. All these personal feelings or happenings have got a general phraseology with robust optimism in his short stories. Prahari, Brindaban Shringkal, Taranga, are a few to name.

He is also considered the main pillar behind the success of the great Assamese mobile theatre, which can only be compared to the Yatra of Bengal. Today the mobile theatre of Assam is a huge industry with a turn over exceeding about Rs 20 crores.

Since 1977 through he has given seven Assamese films all of which have won the Rajat Kamal award as the best regional film viz. Sandhya Rag, Anirban, Agnisnan, Kolahal, Sarothi, Abarton and Itihas. Saikia also won the national award for Best Screenplay. For Agnisnan. Besides he also made a film in Hindi Kaal Sandhya, dwelling on the complicated issue of militancy but where he refused to take sides.

Recognised as one of the top ranking writers of Assam many of his stories have been translated into English, Bengali, Hindi, Telegu, Malayalam, Marathi and Gujarat which testify to their universality and simplicity.

Agnisnan is the most touching award winning film of Dr. Saikia which was made in 1985. In this film he has depicted the true life of the commoners, their hopes and despair, dreams and nightmares, values and morals struggle for a survival both physically and intellectually, individual as well as social obligations and many more. The boldness with Dr. Saikia established the independence of a woman's self, in "Agnisnan" was not only a trend setter but also was an example of cinematic expertise. Most of his films revolved around a woman's character, thus rendering his films women oriented at least thematically. The maestro has acknowledged that women have been a source of inspiration both in their bold and weak versions. And as his writings have expressed his feelings towards this "so called" weaker sex, so have his films.

Aarohan started at Beltola at Dr. Saikia residence, the land he donated to the welfare of the children has a beautiful message "It is my wish .... by the time you are grown up, our land will become beautiful and prosperous. The problems that are present today will no longer be there. All of you have to do your duties well from this moment onwards in order to prepare yourself for the days to come" .

This year on Tuesday 14th August, 2007 the film: Agnisnan will be shown at the Nehru Centre in London (the Cultural Wing of Indian High Commission) to commemorate the 4th death anniversary of Dr. Bhabendranath Saikia. I consider myself very fortunate to be the main organizer for this event.

Today as I write this on the legend, Dr Saikia I feel very happy that my wishes of 20 years back will be completed. When I met B. Saikia (Sir) along with Preeti Baidew (Nanu mami) at that time Nanu Dutta in 1986 at London 21 years ago on their return after attending Nantes (France) film festival, we talked about a lot of things, his days at Imperial College, London , his wish to have a seminar etc. Deep down I promised myself "may be one day ......"

Call him a professor, journalist, story teller, editor, film maker or administrator . For many of us he is just "Sir". So, when he is gone now, the icon-less Assamese society has taken a lengthy pause. One of its last remaining icons has left a void which is difficult to fill.

The author, Ms Rini Kakati is a Legal and Social Counsellor for Ethnic Minority, Dept. of Social Services at London Borough of Tower Hamlet. She did her masters in English Literature from Gauhati University and graduated from Cotton College in 1967. She is married to a Medical professional in 1972 and has been living in UK since then. Her son is also qualified as a doctor.

12 May 2013 - 3:46pm | AT News
The Centre for North East Studies and Policy Research (C-NES) announces the premiere of 'Where there are no roads … ' at the India International Centre (Kamladevi Chattopadhyaya Block) on May 14,...

30 Oct 2014 - 6:40am | AT News
The All Assam Students’ Union (AASU) asked the government to firmly deal with the Islamic fundamentalists, including the Al-Qaeda, and the illegal Bangla migrants who have been sponsoring these...