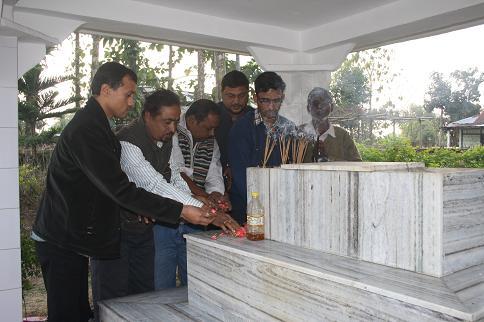 Members of Golaghat Press Club (GPC) led by its working president Bikas Sarma and General Secretary Diganta kr. Bhuyan today visited the residence of late journalist Prahlad Gowala and pay homage on the occasion of his sixth death anniversary by lightning earthen lamps at the memorial stone of late Gowala. A memorial meeting was also held at his residence which was presided over by Bikas Sarma, working president of GPC. Speaking on the occasion Sarma said that when the CID failed to properly investigate the murder of late Gowala then the state government announced a CBI investigation but till date the government failed to hand over the investigation to the CBI. He further urges the state government to provide financial security to the family of the deceased journalist. It is to be mention that Prahalad Gowala, a journalist of an assamese daily was brutally murdered by some suspected timber mafia on the night of January 6, 2006 at Thuramukh area of Golaghat while he was on his way home.

24 Oct 2015 - 6:47am | Siddhartha Handique
A moving train crushed one pedestrian to death in Golaghat leaving the entire district in utter shock amid the Vijaya Dasami festivities on Friday. The incident took place in the evening who was... 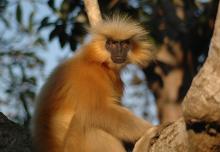 29 Nov 2015 - 2:34pm | Jayanta Kumar Das
Udalguri District Journalists' Union organized a workshop for all the journalists of the district on November 28 on the theme “Role of media on present day changing society”. The workshop was held at...