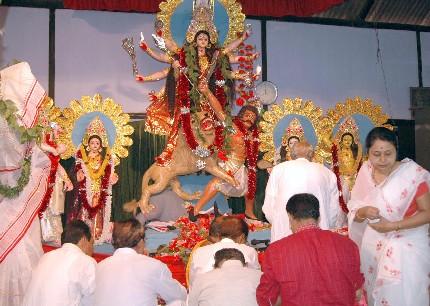 It’s that time of the year once again, yes it is time for Goddess durga to come down to the mother earth for us to show regards and pay our tributes to her. The festive smell is already there in the air. What a rejuvenating experience it is. The very feeling that Durga puja is round the corner makes one feel so nostalgic about so many fond memories. The markets are thronged with people brushing each other in every shop to get the best deal. Let it be the garment shop or the shop with fancy footwear every place is choc o block. Every stranger in the market place smile at each other acknowledging the festive spirit.

According to Hindu mythology, a demon named Mahisashura had threatened Gods out of heaven and established his evil dominion there and this devil was a constant threat to the existence of the universe. Mahisashura could not be defeated by any of the god or man due to a boon he received after intense prayers to Brahma.Neither Indra, king of gods, nor Kumara, commander of the celestial armies could stop him. In despair the gods called on Vishnu for help.

Since only a women could overpower the demon, so all the Gods united and contributed all their powerful traits and hence the birth of Goddess Durga.

Then mounting a lion, Durga prepared for battle.

A great battle commenced. Mountains shook, oceans trembled, clouds scattered across the sky, as the buffalo demon attacked Durga. He rushed towards her, sometimes as a buffalo, sometimes as a lion, sometimes as an elephant. The goddess broke the buffalo's horns with her mace, sheared the lion's mane with her lance, cut the elephant's trunk with her sword.

Weapon after weapon, were hurled at the buffalo demon, but each time he managed to rise up undefeated.

Realizing that her weapons had no effect on Mahisashura, Durga threw them aside, dismounted from her lion and with her bare hands sprang upon Mahisashura's back. With her tender feet she kicked his head. The demon, immune to the weapons of all the gods, fell senseless at the touch of Durga's feet.

Durga then raised her trident and plunged it into the buffalo demons heart, conquering the unconquerable.

This is for all of us to realize that we must be tolerant and accommodating towards all our fellow human beings. With so much intolerance hatred and no value for each other lives, I think this is a wonderful period of the year to get introspective and think how each one of us can contribute in our own small way to make this planet a heaven on earth for all of us. For a day will come if we have no regards and respect for each other, when the Gods would loose their patience and show their superior powers on us and thereafter there will be no looking back.

Lets all in our own simple ways make a promise to celebrate this Durga Puja with a new outlook towards life.