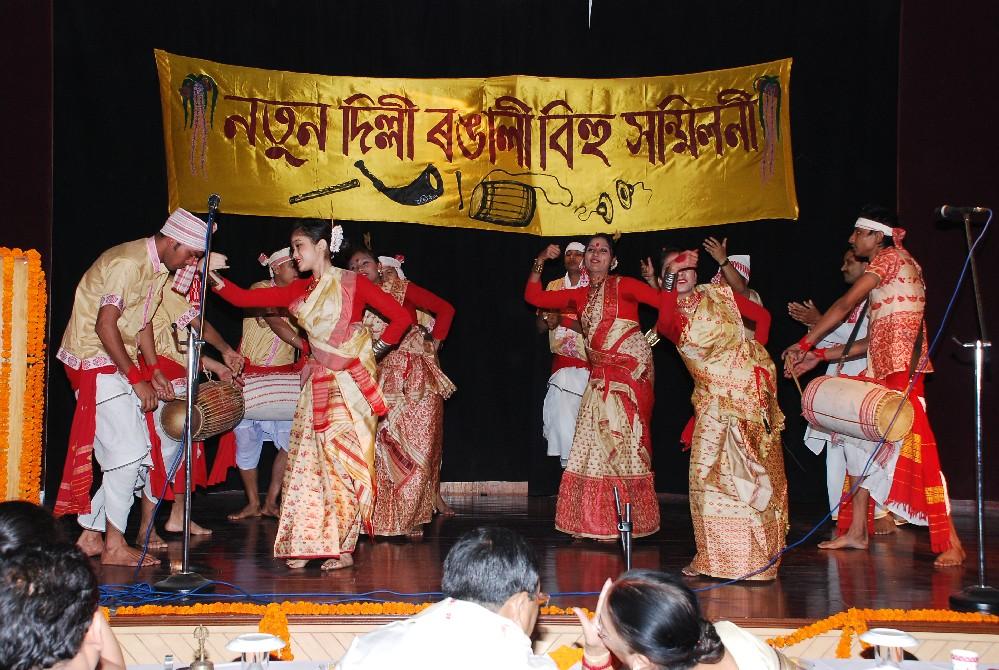 The grand old organization of the Assamese community living in Delhi, the Assam Association, Delhi celebrated ‘goru bihu’ with gusto and fervour, only missing point was the worshipping of the holy cow, which was not possible in a metro city life. It was an evening of coming together of the community to celebrate the spring festival to reconnect with life left behind in Assam and to teach the young city bred generation, about the social capital of the community and the traditional values and cultural heritage.

The cultural nerve centre- Srimanta Sankaradeva Bhawan was abuzz with the sound of ‘dhol-taal’, ‘penpa’, ‘gogona’, ‘hutuli’ and bonhomie of young and old alike. The format of the celebration was radically different this time. The evening was ordained as an occasion for competition for ‘Bihuwa’ and ‘Bihuwoti’ among the children and the youth. There were two categories; above and below 12 years, both for boys and girls. 20 participants took part and competed for the awards. In the Bihuwoti ( Below 12 years, Girls) 1st prize went to Ms Tina Kalita, 2nd to Ms Murchana Sarma and 3rd to Ms.Pari Devi Sil. A special commendation award was given to Ms Nandini Mihiryan (3 1/2 Years age). In the Bihuwa (Below 12 years, Boys) 1st prize went to Shri Sangeet Prasanna Das, 2nd to Shri Dipankar Kalita and 3rd to Shri Priyangam Gogoi again in Bihuwoti ( Above 12 years, Girls) 1st prize went to Ms Tonmoyee Rani Neog, 2nd to Ms Juri Bordoloi and 3rd to Ms. Rashmi Hazarika.

The grand bihu will be held on 24th April at Indira Gandhi National Centre for the Arts, near India Gate. Young popular artist Simanta Sekhar and actor Spondon will be star attractions. More than 2500 people are expected to attend the programme that apart from a host of dignitaries.

Permalink Submitted by Pallavi Barua on Tue, 19/04/2011 - 06:28
Such celebrations away from home are nice events to attend. Children brought up in cities like Delhi, Dubai etc. dancing Bihu is fine. But it would be even better if they learn to read and write the Assamese language well. Has the Assam Associations in different parts of the globe thought about such steps which have long term repercussion, other than organising Bihu functions?

5 Jun 2014 - 10:44am | AT News
A top businessmen from Guwahati is believed to have been in Jharkhand immediately after he landed in the state on Tuesday. There is no trace of Onkarmal Agarwalla, after he arrived in Jharkhand on...

24 Oct 2015 - 6:47am | Siddhartha Handique
A moving train crushed one pedestrian to death in Golaghat leaving the entire district in utter shock amid the Vijaya Dasami festivities on Friday. The incident took place in the evening who was...