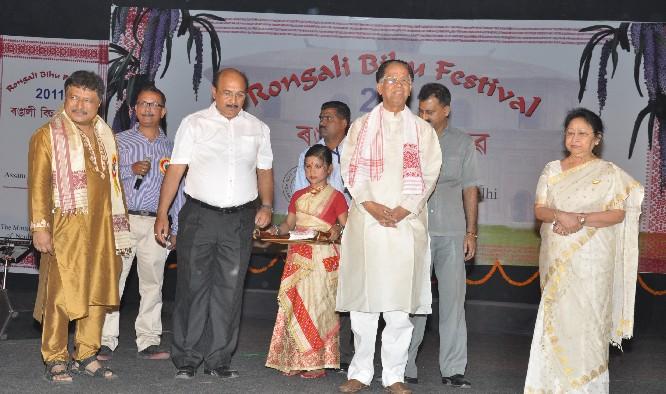 Bitten by the annual spring fever and the romance of the season, the Assamese community, spread all over the National Capital Territory of Delhi (NCR) gathered in large numbers with their families and friends at the Indira Gandhi National Centre for the Arts (IGNCA) grounds to celebrate the mother of all Bihu celebrations on 24th April 2011. The excitement on the ground of IGNCA was palpable as 3 to 4 thousand Assamese people met each other and exchanged pleasantries.

The venue, courtesy IGNCA, is part of its policy to promote the rich cultural heritage of the North East. IGNCA located near the India Gate and at stone's throw distance from the power corridors of the National Capital like the Central Secretariat, Parliament, Rashtrapati Bhawan and the business hub of Connaught Place proved to be the ultimate strategic location to showcase the rich and unique culture of Assam.

Mr. Nayan Mani Bora, CMD of OIL was the Chief Guest on the occasion. Mr Bora was felicitated by the President of Assam Association of Delhi Dr. Ranjit Kr Baruah. The Association had earlier organized a competition on 14th April amongst children for Bihuwa and Bihuwoti and the winners of the competition were awarded that evening.

The Cultural Evening started with a Chorus sung by the members of the Association. The other performances of the evening were Huchori by members of the Association and Assamese youths of Delhi, Hawaiian Guitar recital by Bhaskar De, Satriya Dance Recital by Mridusmita Das, Modern Dance by Bidisha Saikia & Sanghamitra Patowary, Assamese & Bihu songs by Rimli Das, Bihu Dance by Pakhi Saikia, Bihu Dance by Bihuwati Tonmoyee Rani Neog, Group Bihu performance directed by Bhargav Bhuyan And Rim Pathak. A Bihu dance performance choreographed by Mrs Sangeeta Das and performed by about 20 local kids drew loud applause from the audience. It was a testimony to the vibrant community’s success in infusing a sense of pride in its cultural legacies.

Star performer of the function was none other than the Hon’ble Chief Minister of Assam Sri Tarun Gogoi. No Assamese can remain untouched by the spirit of the season, the Bihu spirit. The infectious mood at the Rongali Bihu function affected him too despite his health issues. After a hectic election campaign, the former President of the Association for 5 times shook a leg with the Bihu dancers on stage, catching the crowd as well as his wife Mrs. Dolly Gogoi by surprise.

The Bihu function, organised by the Association for the second consecutive year at the IGNCA Ground, turned out to be quite entertaining and power packed. The Chief Minister joined Tonmoyee Rani Neog, a post graduate student of History at JNU, on stage. He was accompanied by a top office-bearer of the Association, Manoj Kr Das. The bewildered security personnel didn’t know what to do.

The Chief Minister, accompanied by his wife, spent quite some time at the function. A relaxed-looking Chief Minister, sitting with Rajya Sabha MP Kumar Deepak Das and Durga Das Boro posed for photographs, shook hands with his admirers, with the audience and eager students studying in Delhi. When asked for his comments on the Assembly elections by newspersons, Gogoi declined to issue any forecast unlike some of his colleagues and said he has come to relax among his own and election results are the last thing on his mind.

The function was compered by Dip Saikia and Ilakshee Bhuyan Nath.

Programme on traffic knowledge on May 24 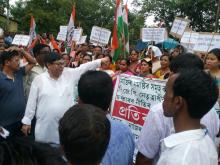