Assam Association, Delhi celebrated the Magh Bihu Festival with traditional fervour at the Central Civil Secretariat Grounds at Chanakyapuri on 16th January. The celebrations began with Uruka (the eve) which was celebrated on Saturday, 15th January.

A grand bihutoli was set up elaborately along with a stage for the 1200 guests. The bihu bhoj (feast) was prepared throughout the night with chefs/cooks toiling to churn out the tastiest masor tenga jul, murhi ghanto, chicken curry, bengena bhaja, payax etc. Ghila pitha and Bundiya Bhujiya, which are typical Assamese snacks, were arranged to give the feel of being back home. A ‘meji’ was erected with bamboo and firewood, and to be set afire on Sunday morning to bid goodbye to the harsh winter of Delhi.

After that, the Chief Guest, Mr Hari Sankar Brahma, Election Commissioner of India, was greeted. The Guest of Honour, Justice Dr Mukunda Kam Sharma, Justice of the Supreme Court of India, was received thereafter. Mr Brahma lit the ‘meji’ amidst chanting of mantras and invocations. Justice Sharma released the “Samayik”, the association periodical, which is in its 21st year of continuous publication. Mr Hiron Dutta introduced the contents. Samayik is the medium of communication among the members of the association and a means of cultivating literary traditions among the members.

The day was also celebrated as the ‘annual sports and activities’ day. The children’s painting competition commenced from 10:30 am, followed by a football match between President’s 11 and General Secretary’s 11. The team members were amazingly sporting and of all ages. Races too were held – children participated in running while the not-so-young ladies and gentlemen participated in walking races. “Tekeli Bhanga” (the challenge of breaking a clay pot blindfolded), tug of war etc. were other hilarious competitions that extracted loud cheers from onlookers.

The ‘Who’s who’ of the Assamese society of NCR turned up for the Annual event. Artists, Journalists, Bureaucrats, Entrepreneurs, Students, Homemakers - they were all there and in large numbers.

The games and sports-events had culminated by 2:30 pm. Food was laid out and people queued up in an orderly manner. After lunch a game of an Assamese version of ‘Antakshari’ was held. It was followed by the Prize distribution ceremony for the events held during the day. The President of the Association, Vice Presidents, Manoj K Das and Rumi Sarmah and GS, Tridib Saikia, gave away the prizes. Students who had scored more than 90% in XII- Board examinations were also felicitated; they were Ms Priyanka Das (95%) and Mr Chandan Jyoti Sarmah (93%).

Later, a local Bihu team charged up the atmosphere with twists and turns of the spring dance. An impromptu dacing frenzy broke out, as is the norm. The celebrations ended with a round of tambola after the evening tea. It was another successful and memorable yearly event. General Secretary, Mr Tridib Saikia presented the vote of thanks to all the sponsors and persons who made the event possible through their generous monetary help or contributions in kind.

The participation has seen a steady increase by the day, in this festival of harvest and of the declaration of the termination of winter, with the ‘Uttarayan’ of the Sun. The busy schedule of Delhiites limits social contact, but this bihu-fest provides an opportunity to meet and exchange notes on an annual basis that no one likes to miss.

Delhi has an Assamese population of nearly 100,000 who are making their presence felt in various professional and social spheres. Delhi is the hottest destination of the young Assamese seeking quality education and career opportunities. The city’s heterogeneous ambience makes one adapt quickly. It’s also nearer home and is hospitable and expanding radially in the NCR, providing scope for a roof to everyone.

Permalink Submitted by Ram Sarangapani on Fri, 21/01/2011 - 03:56
Excellent report, Manoj. A very hearty congratulations to all in the Assam Association, Delhi in making this huge even a grand success. A a very Happy Bihu to all of you. Best Wishes, Ram da

Permalink Submitted by drprema goswami on Fri, 21/01/2011 - 11:39
though we have been staying outside India for a long long time but visiting India and Assam regularly.we love our country and whenever we receive good news about our Assames community and our untiring friends like Manoj we feel happiness and joy.May God Shine On Our Assam,India and my countrymen. 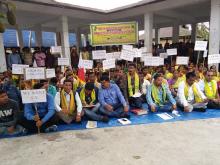 28 Mar 2017 - 6:48pm | AT Kokrajhar Bureau
Hundreds of activists from AKRSU and Koch Rajbongshi Mahila Samiti joint hands with banner, placards in the sit in demonstration in front of DC office on Tuesday in Kokrajhar, demanded creation of... 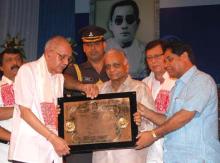 2 Apr 2010 - 10:40pm | editor
Manipur tops the unrest state at the height of insurgency till date. Assam stands next to Manipur in terms of insurgency. According to a report by union home ministry, the two north eastern state has...