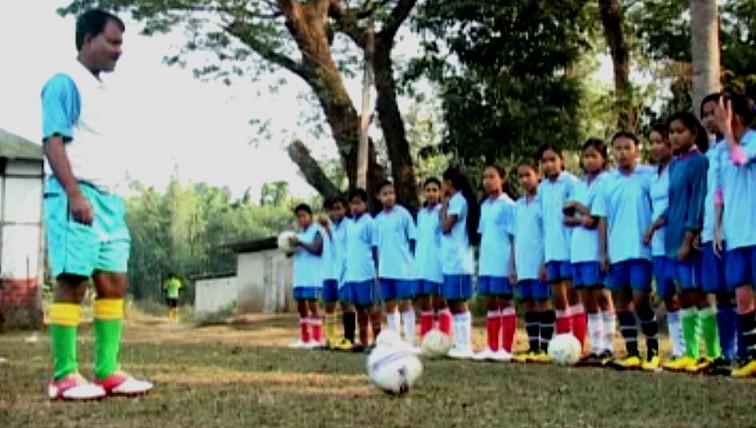 Love for the game of football in the entire North East India is not new, people in Assam also love football and had produced good players in the past. However female participation in the game and achieving accolade is not that have been seen too often. The reason expert says is lack of good coaching facilities, sponsors problem from both private and the government and thus not too many tournaments for the girls for exposure.

Cycling and walking through long dusty roads from different villages in greater Rani area, school girls gather in the Rani High school field with dreams in their eyes, a dream to play good football, a game that is not alien to them. However no tournaments or encouragements for theses girls to play in the village. But a football coaching camp is changing the attitude of the girls and the perception of the villagers too.

Hem Das, an experience coach of Guwahati young star club, has started a Football coaching centre in Rani high school in coordination with local villagers and the Rani High school headmaster. The objective of the center was to develop a boy’s football team but that was not encouraging even after two years had passed, In contrast the coach had decided to give a call for the girls in the end of the last year and to a great surprise some 40 odd girls enrolled in the coaching camp within no time. What can be more encouraging than this for any sports? “I want to bring good name to our village and our locality and hoping to join the Assam team and thus I have joined the football coaching camp and I used to play in school also” said Nitumoni Kalita.

Now Since that a good number of girls had joined the camp, Hem Das has made up his mind to unearth their potential and give them a good exposure by ensuring them to play a tournament in the Guwahati very soon. The enthusiasm showed by the girls has encouraged the coach to train them hard for the near future. All these girls come from villages like Moirapur, jayantipur, maskuchi,natun rani, Rani, Natun batabari, koroibari, pitbari, bahupara, goimari, rangapara, lalmati.

Asked if any one have hard about Baiching Bhutia, the answer is straight “No” and if yes, “What Game does he play?”. But that’s not a matter of concern seeing their interest in the game. I don’t have a TV sets at home, and so cant watch any football game, but I want to play for our state in the near future, said Nizara a practicing goalkeeper and a student of Tenth Standard in the Rani High school.

The reason that the girls are difficult to manage for continuing practice is because of their house hold works and lack of proper backup from their parents and many other reasons, admits Hem Das, and thus he has decided to call Guardian meeting. He wants to make agreements with the parents so that the girls are allowed to play in competitions and thus making sure that the energy and money wasted doesn’t go in vain.

With no prior exposure regarding training for football game the girls try to show a great discipline in practicing the game, after all they have grown seen football in their villages and the coaching center is giving them hope to be a football player and play in the tournaments in the city.

It is the interest and love for football that Hem Das, on his own has started the free coaching center, bearing own expenses. However he is hoping to get sponsors for the girls for developing their interests. He says it is easy to get sponsors in the city but not in the village and the contrast is that village girl shows interest in playing football not girls from a city. A city girl can’t effort to do much hard work like their counterparts in the village. After all football is a physical game.

The surrounding trees and the By-cycles are the only spectators to watch and encourage these girls while in their long hour practice session in the school fields, besides the coach a local young footballer call Niranjan, are the only people to take care of these shy girls. 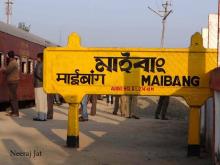 26 Jan 2018 - 5:18pm | AT News
HAFLONG: Senior ministers Porimal Suklavaidya and Keshab Mahanta are on a visit to Haflong on Friday a day after the Maibong incident where two people were killed in police firing triggering a...

All out in nine days

20 Mar 2008 - 11:20am | Daya Nath Singh
It was in Meghalaya, a nine days drama in power. The recent Assembly elections did not give a clear mandate to any political party. The Hung House compelled the political rivals to forge alliances,...