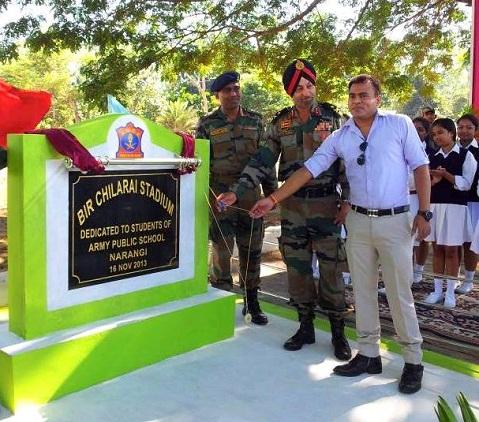 The Narengi Army public school in Guwahati, will soon a have a full fledged football stadium in the Name of "Bir Chilarai", the great general of the 15th Century Koch dynasty.

The foundation stone of the stadium in the Army School premises on Saturday, was laid by General G S Chima, HQ 51, who is also the patron of the school. Along with was present Indrajeet Saikia, the President of Koach Yuba Chatra Parishad. On this occasion a book on Bir Chilarai was also released.

Speaking to the gathering of students the general had asked the students to read about Bir Chilarai, who know for his fast movement the prey bird "Kite", He added " I am aware that football runs in the blood of the people of the North East and in the game of football too one has to be fast like the Kite to play the game well". In the same programme the Army also distributed Blankets and soft toys for Blind students, bed sheets and 50 sewing machines for women.

The blind students had performed dance and sang songs on this occasion which was appreciated by all. "I had asked General G S Chima, to help the blind students and also poor women with the funds allocated for women empowerment and thus the army quickly respondent" said Titan Atifa Mashood, member of the NGO, Consortium of International Minds, who had taken the initiative to facilitate the programme for the Blinds.

21 Feb 2022 - 9:51pm | AT News Imphal
Imphal: Congress leader Rahul Gandhi on Monday launched a scathing attack on BJP and RSS, saying they have assaulted the history, culture and language of Manipur. The Congress' star campaigner was...