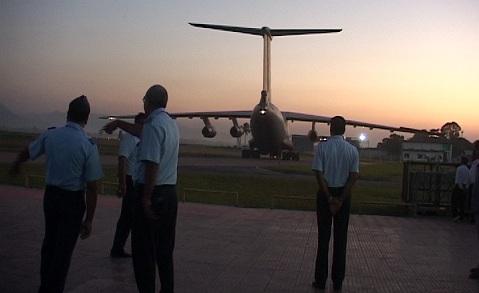 An Indian Army contingent of 160 member landed in Guwahati Airport on Thursday after ending a 10-day-long joint military exercise with the Chinese counterpart. Brigadier D S Shisodia, who led the team for the joint anti-terrorism training exercise at Miaergong of Sinchuan Province, southwest of China, said that it was good experience all together with professional interaction and good training on counter terrorism It will boost the relation of the two nations. "I hope it will promote regional tranquility along the border and improve mutual trusts". He added.

Code-named 'Hand-in-Hand 2013', the joint training session included demonstration of weapons, physical training, handling IED, exchange of tactics and mixed training in arrest of suspects and rescue of hostages. Along with the 160 soldiers from each side took part in the joint exercises.

Such joint exercises were conducted twice before - in 2007 in Kunming, China, followed by 2008 in Belgaon, in India.

7 Oct 2008 - 3:10pm | editor
Noted singer and Sangeet Natak Academy award winner Dilip Sarma passed away on later Monday night at the Guwahati Medical College Hospital. He was 78. He was suffering from cancer for the last two...