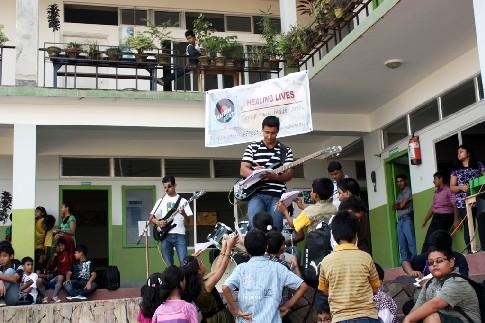 For a region known for its fascination with rock, 2010 was a bit of a dampener in the Northeast because of the absence of performances of international bands worth reckoning; a major reason being the lack of viable venues and the closing down of some of the previous ones. But despite it all, the music calendar of the region was packed to the brim this year, marked by the emergence of a lot of new local talents thanks to the fast emerging pub rock scene. Another interesting development that could be witnessed here was the re-emergence of folk or experimental music as a preferred choice of music fans here.

Talking about experimental music, the ICCR-sponsored performance of Mexican singer Jaramar in Guwahati was one of the most notable. Jaramar, who feeds on her traditions to create a deeply personal music, was part of a unique fusion experience in Guwahati where she incorporated Mexican music with the Indian Sarangi, Flute and Tabla. Wvoath – a folk-fusion band of the Lepcha community of Sikkim – tops the list among the new home-grown experimental bands.

Cherapunjee festAs it is with other parts of the country, metal has become the preferred genre for the youth in most States of the Northeast. Judging from that angle, a number of prolific bands have indeed touched base here this year. Mention can be made of outfits like Swiss folk metal band Eluveite that performed in IIT – Guwahati’s annual cultural fest ‘Alcheringa’ in the month of February. For the uninitiated, Eluvietie is presently raging across the European folk metal circuit, with its authentic bend of Celtic folk music and melodic death metal. With a wide population of metalheads spread over the region, the band’s performance in Guwahati was definitely worth reckoning. One also remembers the performance of DeProfundis – a UK-based death metal band that performed in the city towards the fag end.

While the overall music scenario is most of the States does not appear to be too rosy and can be said to have even gone down from previous years, a significant development could be noticed in the emergence of pub gigs which have caught the fancy of music lovers in most of the States. Besides serving as a potent launching pad for new artistes, these places have also witnessed performances by some visiting artistes and bands. In Guwahati, mention can be made of Cafe Hendrix, the Rockarolla Pub Rock gigs held at Cafe Blues and the gigs organized at Traffic Bar and the Basement Jaxx. While Nagaland has a number of lounge bars that organize such shows, Tango Lounge is the chief organizer of gigs in Shillong. Jumping Bean Cafe, Cafe Hiyo, Cafe Destination and Dream Cafe are some of the most popular lounge bars in Nagaland that organizes such independent musical events.

Cleave from Manipur performing
during Karbi Anglong National
Beats ContestTo provide a State-wise break-up of the music scene, Nagaland – the only State to have a clear-cut music policy – remains the most proactive among all the State governments. That should not come as a surprise when we take into cognizance the fact that it is probably the only government in our country to have dedicated an entire governmental wing in the form of the Music Task Force (MTF) for the promotion and propagation of music in its land. The Music Task Force, led by its project director Gugs Chishi, has indeed been doing a commendable job in pursuing the objectives it has been set up for.

One of the most successful initiatives of the Music Task Force would be the Hornbill Rock competition, which is being projected as the mother of all rock competitions in India. With a huge prize money of more than Rupess 10 lakhs dedicated for local rock bands of the country, I don’t see any reason why they should not get that tag. The Hornbill rock competition is organized as part of the annual week-long traditional Hornbill festival of Nagaland. Twenty top bands from all over the country participated in this year’s competition, which saw Slain (Bengaluru) walk away with the winners trophy of Rs. 5 lakhs. Traditional music, dance, food and the best of rock – Hornbill truly is a festival not to be missed!

Talking of traditional festivals, music has become an inseparable component of the many such festivals organized in the region. One can talk about the Autumn festival of Shillong, the Sangai festival of Manipur, Cherapunjee festival of Meghalaya, etc. All these festivals had a host of prolific musicians performing therein. For instance, Indus Creed, who are presently on their re-union tour, had Cherapunjee as one of the venues and watching their performance, all one can say is that they are much stronger than ever before. The other bands who performed in Cherrapunjee were Blues-rock band Soulmate, Shillong-based bands Colours and Snowwhite, Japanese Buddhist monk Gyomyo Nakamura, experimental rock band Abiogenesis, multiphronic chant master Lama Tashi, Delhi-based singer-songwriter Sushmit Bose, amongst others. Nakamura, for those who don’t know him, is a Buddhist monk who lives in India for most of the year and who is also a rock musician with insane guitar skills!

Besides these frequent gigs and festivals, another significant development would be the emergence of music being used as a social tool for peace and reconciliation. The lead in this regard has been taken by the Eastern Beats Music Society – one of the foremost bodies of musicians, music lovers, artists and activists. From streets shows and jamming sessions to the much hyped 2nd Karbi Anglong national beats, this society has been really reaching out to people in the hinterland, showing the healing and nurturing qualities of music. The Karbi Anglong Beats is an unique attempt to promote village bands as well as channelize the energy of youth in a positive direction. Ten top bands from across the country had participated in the second edition of this contest that was held in a insurgency and ethnic-violence hit area, and which was incidentally Assam’s first national rock contest. Dementia from Nagaland walked away with the winner’s trophy while Cleave from Manipur finished a close second. Talking about the use of music as a social tool, one also remembers the efforts of the Haflong Music Association which had actually dared to organize a peace concert in the middle of strife-torn Haflong town of NC Hills! Brave souls who have shown the immense healing power of music!

While the region continued to host its annual music festivals, like the Lou Majaw-led Bob Dylan celebration in Shillong, the club circuit of the region also had some prolific musicians performing in their midst; litterateur and experimental vocalist Amit Choudhury, Indian Ocean, santoor player Rahul Sharma, Shankar-Ehsaan-Loy, KK, being a few of them. A few musicians and groups from the region have also established their hold firmly in the independent industry in the mainland and abroad this year. Talking on these lines, how can we forget the performance of the Shillong Chamber Choir that is presently raging across the South-east Asian choir circuit? This group, which performed for visiting US president Barack Obama after winning India’s Got Talent and gold medals in the World Choir competition, had it coming for a long time now and it is of much pleasure that Bah Neil Nongkynrih and his troupe finally got their due. The Angarag ‘Papon’ Mahanta-led East India Company is also proving a point, having performed in the cultural evening of the Commonwealth Games.

A melange of performances but when it comes to the audience, the response is loud and clear: We want more!

Permalink Submitted by Gaurab Sinha on Wed, 29/12/2010 - 17:55
Its really nice to know Northeast India emerging day after day in the field of music. This industry will draw more talent from the entire region and has the potential to compete with other musician and bands on the national level as well as international level. Recently, Shillong Chamber Choir was felicitated by CNN-IBN TV channel which is a boost to all the music lovers and enthusiasts. Overall,Music in India proved a point in this year, 2010, which is coming to an end, promising more upcoming talents in the field of music.

11 Feb 2014 - 9:56pm | AT News
The Assam government has on Tuesday announced the Madhabdev Award to Mrinal Miri. Instituted after the saint, the veteran educationist will receive the award.