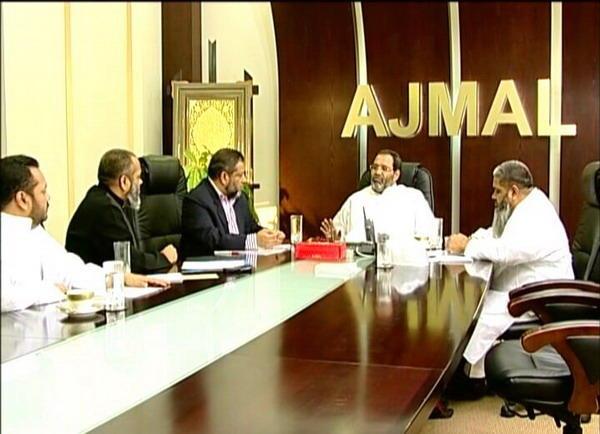 There are some things that add spice to life. Perfumes are one of them. They are associated with elegance, culture and wellbeing. It is one of those products that may influence our emotions. Countless books have been written on the beneficial effects of perfumes on the body and mind. Medical research has established that the odors we smell have a significant impact on the way we feel. Perfumes from the Gulf region are unique in their appeal and originality, enjoying a certain “essence” which is unique to the region. They are an exotic and rich combination of incense and oils but without the use of an alcohol base that is normally used in Western perfumes. They have woody, oriental, flowery, fruity bases with sensual notes of musk, ambergris, cedar, spices, frankincense, citrus, sandal and cashmere wood. A small drop of Arabic perfume is enough to make aroma last for about 10 hours.

In the Middle East today, Ajmal Perfumes is synonymous with “the most excellent perfumery products” created in the region. Founded by the prolific entrepreneur Ajmal Ali, in 1951, who was from Hojai, Nagaon district of Assam, Ajmal Perfumes has today grown into a robust, multi-million dollar corporate. The brand stands out as a pioneer in the marketing of perfumes, fragrances and cosmetics to the Arab and western markets. It all begun when Ajmal Ali, a farmer came to Mumbai to try his luck as a trader in perfumes. The abundance of agarwood or oudh in his native Assam gave young Ajmal the idea that he could perhaps make a living out of trading in this natural resources, the prime ingredient of all oriental perfumes. With 500 rupees and some oudh oil as his starting capital, he left his hometown for Mumbai with high hopes.

In the tradition of great masters, Ajmal Ali worked in a dingy house in Bombay in the early 1950s blending perfumes and trying to find the right mixture that would impress the many Arab traders who visited India’s western shores and were fascinated by the country and its aromatic herbs. In 1964, he gives his family name to his product range. He shifted his operation base from Bombay to Dubai in 1976, where he opened the first Ajmal outlet and launches its first fragrance “Mukhallat”. The product was an instant hit and the success of the product prompts the company to launch more such products. Half a century later, his eldest son Amiruddin Ajmal today presides over the Dubai-based company which has an annual turnover of $170 million and is a regional corporate entity with a vast portfolio of over 100 of the finest and most captivating fragrances. Today, they have established a strong regional presence with over 200 showrooms across Gulf countries and hundreds of dealership across the world.UAE, Saudi Arabia, Oman, Kuwait, Qatar, Bahrain and India comprise the retail network. The global distribution network is spread across Pakistan, Russia, Iran, Syria, Maldives, Egypt, Turkey, Germany, Bulgaria, Sudan, Libya and Austria. The company has invested over $10 million in a new 150,000 square-foot facility in Dubai that offers a high-tech automated production unit including a state-of-the-art research wing. They are also the only regional perfume manufacturer authorized to issue quality certificates on behalf of the Saudi Arabian Standards Organization, or SASO. It has also been awarded the “Superbrand Status” following a strict selection process by the Kuwait Superbrands Council.

Nazir Ajmal, the youngest son is regarded as the nose of Ajmal. He plays a dual role as he is the Chief Operations Officer and the Chief Perfumer of the company. He says the company creates fragrances in both sprays and oils and that they fall broadly into two categories — oriental and French or Western. Oriental fragrances tend to be highly concentrated and are usually five times stronger than the Western ones. But, explains Ajmal, oriental perfumery is constricted by the use of a limited number of ingredients whereas perfumers can work with many more ingredients in Western perfumery and, as such, be more creative and produce a diverse range of products. The key ingredient of Ajmal’s products, of course, is oudh and this is not always readily available as it is found only in Southeast Asia and India’s Assam state. So they have their own plantation in Assam.

To remain in business, perfume manufacturers have to be constantly innovative. In the case of Ajmal Perfumes, its marketing teams do considerable research on consumer taste and behavior and report that to Nazir Ajmal. Based on the input, Nazir Ajmal then comes out with different blends. But ultimately, Nazir admits, it is the market that decides the fate of a particular brand. Ajmal takes great pride in the fact that every fragrance launched under its banner has been conceived, created, developed and manufactured in-house.

The best part is that the company has employed hundreds of people from its native state. They have twenty showrooms in Kuwait. I visited their showroom at Kuwait Magic Mall, where I met two employees from Assam, Ahmed Alauddin, the showroom manager and Imdad who were very helpful. I was surprised when they showed me the best quality agar wood which is from Assam sold at 825KD/ Kg i.e. Rs1, 32,000 per kg. I was happy to know that out of around 6000 employees in Ajmal Perfumes 70% are from Assam.

Today, Ajmal is a well-established business house with thousands of people working in factories and showrooms in India and abroad. The second generation of Ajmal’s has expanded their business strength into other businesses such as garments, leather goods, cosmetics and real-estate. But business has been just one part of Ajmal Ali’s life. The phenomenal rise to fame and prosperity did not make him forget his native village and did all he could for the poor and underprivileged. As part of its commitment towards promoting medical welfare, the HAMM Public Trust operates two medical establishments - the Haji Abdul Majid Memorial Charitable Dispensary and the Haji Abdul Majid Memorial Hospital. The dispensary provides free medical treatment, including medicines to approximately 300 needy patients daily. Other areas include child healthcare and basic healthcare education. The state-of-the-art Hospital and Research Centre is one of the largest charity and most modern rural hospitals in the country. It won’t be wrong to consider it as one of the most advanced rural hospitals in the South-East Asian region. The dispensary and hospital is in Hojai, the birth place of Ajmal Ali, which is one of the remotest parts of Assam. Ajmal Ali has ensured that over 80 percent of the hospital’s services should be provided free of cost to the poor who are in no condition to pay for their costly tests, diagnosis and super-specialty treatment. To boost the level of literacy in the country, the Markazul Ma'arif runs a group of schools under the name of Markaz Academy. Another centre of education is the Markazul Maarif Education and Research Centre (MMERC) which was established in Delhi and subsequently moved to Mumbai in 2000. The centre aims at providing basic education to the needy. The HAMM Public Trust even grants scholarships and subsidized assistance to deserving students, those who wish to pursue advanced medical studies. In order to alleviate the problem of unemployment in the country, both the HAMM Public Trust and the Markazul Ma'arif provide counseling and training to the unemployed youth. The Markazul Ma'arif manages the Markaz Darul Yatama Goalpara - an orphanage in Assam, which houses over 700 orphans and destitute children. The Trust provides them with the basic amenities like food, clothing and shelter, free of cost. Qualified teachers including trained physical instructors provide elementary education to the residents. The Maryam Ajmal Women’s College of Science and Technology in Hojai is one more example. It is a excellent proof of the Ajmal’s effort for social reconstruction through quality science education and also to show their deep love and gratitude to their mother, the late Maryamun Nisa Ajmal, wife of Ajmal Ali, whose memory they wish to immortalize by educating and empowering women.

Eminent Bollywood filmmaker Mahesh Bhatt made a documentary on Ajmal Ali and his social work, 'Torchbearer: The Story of a Philanthropist'. “I made this documentary to highlight one of the real heroes of this country. Unfortunately, the glamour industry is elbowing out the face of the truth. We have to distinguish between success and fame in a more realistic sense. The film stars may be famous, but it is people like Gandhi and Ajmal Ali who are the true heroes of the nation. The responsibility of this nation belongs to us. Either all of us make the nation, or all of us die together,” said Mahesh Bhatt in a short speech during the screening of the documentary.

Ajmal Ali died on February 17, 2009 and the family business is now managed by members of the Ajmal family spanning three generations. Late Ajmal Ali’s five sons have distributed the work among themselves. They are, in UAE, Amiruddin, CEO of Ajmal Perfumes; Fakhruddin, CEO Ajmal Real Estate; Nazir, COO, Ajmal Perfumes, and in India, the two other sons Badruddin(a politician and president of Assam United Democratic Front (AUDF )and Sirajuddin(politician and member of AUDF) look after the India operations as well as all the philanthropic work. The Ajmal’s have reached out to the suffering humans without noticing their creed, color or religion. They have truly followed their slogan 'Service to Humanity is a Service to God'.

Permalink Submitted by SSarkar on Sun, 17/10/2010 - 19:49
I love their perfumes. The social work they have done is truely great.We need more people like AJMAL in Assam.

Permalink Submitted by Priyalakshmi B on Sun, 17/10/2010 - 21:44
We need more people like Late Ajmal Ali in Assam. There are many people doing well in business but no one like HIM who have done so much for the society.

Permalink Submitted by A.Borthakur on Mon, 18/10/2010 - 14:38
Enjoyed reading it about their business abroad. Did know about them but not so much in details.

Proud to be in AJMAL. However

Thumps up to the Ajmal family

Permalink Submitted by Anshuman Baruah on Wed, 03/02/2016 - 13:44
Thumps up to the Ajmal family. I feel really proud to be an Assamese. Today I am staying in Dubai, and I know what a great and popular brand is Ajmal in Dubai. Great going. All the best

26 Jan 2008 - 5:09am | editor
Chief Minister Tarun Gogoi has asked the Chief Secretary to set up a one-man inquiry committee headed by Principal Secretary PK Choudhury to probe into the reasons for the rise in incidents of...

16 Sep 2013 - 3:36pm | AT News
Security forces claimed to have killed a hardcore NDFB militant belonging to the Songbijit faction at an encounter in Kokrajhar district on Sunday. The encounter took place in the evening at...

11 Oct 2012 - 1:35pm | Daya Nath Singh
‘Majority of the four lakh displaced people of July 2012 violence in Bodoland did not return to their homes apprehending fresh attack from miscreants of rival communities due to burning of...