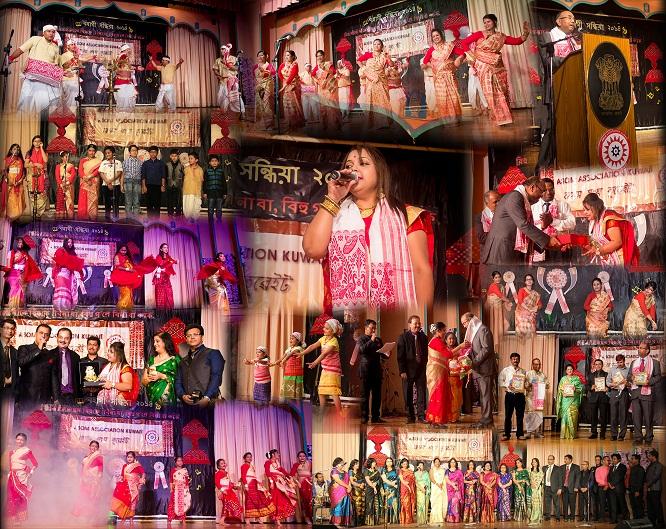 The Assamese community of Kuwait celebrated Rongali Bihu this year with much fanfare under the aegis of Asom Association Kuwait. Rongali Bihu was celebrated over two days, on 18th April and 29th May 2014.

The onset of Bohag, the Assamese spring season was celebrated by organizing a day long festivity of ‘Khel-dhemali’ in the Al Fintas Park where the Assamese community gathered for outdoor fun and games activities on 18th April. The members were welcomed with a plateful of different varieties of pithas, larus, doi, chera, kumol saul and other snacks prepared by the ladies. The bright sunny morning in this expansive park was a perfect setting for the members to relax and network, while the children played to their heart’s content. The attraction of the morning was the innovative games devised by Dr Anjol Saikia and  Anjan Tamuli. The program ended with a wide array of delicious lunch prepared by the members.

The main Rongali Bihu function was celebrated as “Bornali Kalita Xondhiya” on 29th May 2014. The venue for the celebrations was the magnificent Indian Embassy Auditorium. The programme started at 5:30 pm with the felicitation of the guests, Hon’ble Ambassador of India to Kuwait, His Excellency, Sri Sunil Jain and the guest artist - melody queen from Assam Ms Bornali Kalita. It was followed by lighting of the ceremonial lamp by them. President of the Asom Association Kuwait Mr Anup Bora in his inaugural speech welcomed the gathering and outlined the importance of this celebration. His Excellency Sri Sunil Jain in his speech lauded the efforts of the Association and spoke about our beautiful Assam and the mighty Brahmaputra. He also expressed his pleasure in seeing the display of handicrafts and artifacts from Assam arranged as an exhibition by Mr Jayanta Bardalaye and his team. The annual Souvenir of the Association “Jetuka”, edited and published by Chinmoy Dutta and his team was released by the Hon’ble Ambassador. He commended the effort and appreciated the available literary talent. He also distributed the prizes of the Drawing competitions to all winning children and to the members for on-the-spot creative writing competition.

The children amply demonstrated their talents by performing our beautiful traditional Bihu dance (Trishala, Shreya, Upasana, Ananya), Tiwa Bihu by Mehr, Runa, Ruhi and Bagoromba Dance by Anchita, Anuska, Ashmita, Diksha, Meghna, Isha. A fusion of our traditional and modern dance was performed by Rudrakshi, Jigyasa, Taniya, Rinky, Subhangi, Riya, Riha and Devanshi. A patriotic song was performed by Adit, Krishnanshu, Nupur, Rishi, Rounak, Rhitam, Rudrakshi, Anshita, Subhangi and Meghna. All the children put up their best performance and it was a treat to watch them perform. They beautifully demonstrated the diverse Assamese culture, tradition and unity with their alluring performance. The programme was hosted by Alok Das and Bijon Goswami.

A memento was presented to Ms Bornali on behalf of the Association, in appreciation of her participation in these celebrations and as a token of our love and affection. Another guest of the Asom Association, Aakash Panwar, President of Aapna Bharat Society was felicitated.

After the in-house cultural programme, the stage was opened for “Bornali Kalita Xondhiya” and the versatile singer drew attention of all in the crowd. In her maiden appearance she showed her versatility in full measure as she sang from a whole range of hit Assamese songs. She bonded well with the crowd as she sang playful Bihu numbers and captivated the crowd. As she rolled out the latest Assamese and Bollywood hits everyone including adults and children trooped onto the stage as they sang and danced to the tune of her music.

Prizes were distributed for the Quiz series “Xandhan” organized by Iqbal Hussain through our website http://www.kuwaitotasom.com.  Many received attractive gifts from the Association in the raffle arranged effectively by Rajib Rajkhowa and Dwaipayan Bora. The programme ended with ‘Vote of Thanks’ by the General Secretary of the Association Abhijit Sharma. As we remained engrossed, we failed to notice that it was time for dinner. The grand finale to the celebrations was the sumptuous dinner arranged by Ranjit Dutta and his team. 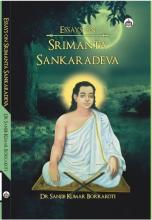 20 May 2021 - 1:52pm | AT News
Essays on Srimanta Sankaradeva authored by Dr Sanjib Kumar Borkakoti is a valuable addition to the works on Indian culture and philosophy. The author has carried out extensive research on Assamese...

Sensation in Geku over sexual assault

13 Sep 2015 - 8:10am | AT News
The sexual assault of a six year old student by a hostel warden at Goko creates no less repercussion among the student fraternity Arunachal Pradesh.  Various organizations have demanded...