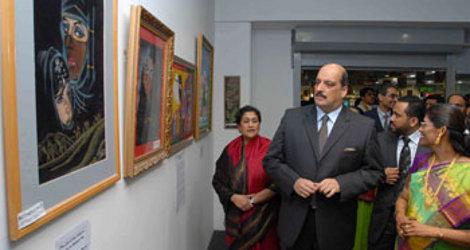 In connection with the Indian Republic Day celebrations, Indian Ambassador Sri Ajai Malhotra inaugurated an eleven-days long Incredible India Festival organized by Lulu Hypermarket in Al Rai. The Festival which started on January 20, will continue till January 30. "In the spirit of the "India Tourism Road Show" held in Kuwait in October 2009 and the "Festival of India in Kuwait" organized in November 2009, the Festival at Lulu Hypermarket will provide another exposure to India's rich cultural heritage" said Ajai Malhotra in his inaugural speech. During this event, a number of Kuwait based Indian artist will perform variety of Indian classical dances like Kuchupudi, Kathak, Bharat Natyam, Manipuri, Mohiniyattam, folk dances like Oppana, Dandiya, Bhangra, besides flute, santoor and tabla recitals.

An exhibition of paintings by Nalini Mohan, an Indian artist based in Kuwait is also arranged. The exhibition has attracted lot of art lovers. It displays artist’s interests in different mediums of oil paintings, metal embossing etc depicting various traditional Indian symbols and others. Through a variety of Tanjore paintings known for their vivid colors and rich composition, on display, the artist conveys her inner feelings through her creations.. Visitors can also obtain information on tourist destinations across India from the India tourist office counter that has been set up.

Apart from the cultural activities, the mall arranged display of special products and flavors from all over India. A special promotion on Indian ethnic wear like sarees, churidars and kurthas is also arranged.

Permalink Submitted by Sunanda K Baruah on Mon, 08/02/2010 - 19:39
Nice to see the indian culture so much vivid and vibrant in the far away land..it was very informative. As an author of this article,i feel you have made the whole event go live in front of me...

23 Aug 2012 - 6:40pm | editor
Normal life in parts of the state has been thrown out of gear under the impact of the day-long bandh called by a minority organization to protest the BTAD violence. Shops, schools, business...

6 Feb 2008 - 4:02am | editor
The Reliance Communications has received government nod to provide CDMA services under the existing Unified Access Service Licences in the entire north eastern region. The Ministry of Communications...