24 Nov 2014 - 10:02pm | AT News
Delhi Dynamos FC down NorthEast United FC by 2-1 goals to storm into semifinals of the Hero Honda ISL match in Guwahati on Monday.It was Gustavo dos Santos, who have the visitors the lead with a... 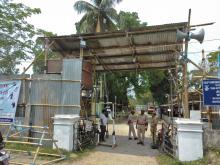 27 Apr 2019 - 9:34am | AT Kokrajhar Bureau
Kokrajhar: Three tier security arrangement has been made in the Strong Rooms where EVMs are kept in Kokrajhar. Returning Officer and Deputy Commissioner, Partha Pratim Majumdar told the media that...