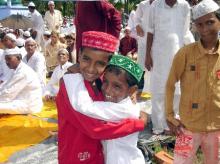 14 Oct 2007 - 4:19am | Rituparna Goswami Pande
The festival season has been set into motion with the celebration of Eid-Ul-Fitr today. The Muslims the world over assemble in various mosques and Iddgahs in order to offer Namaj and express their...