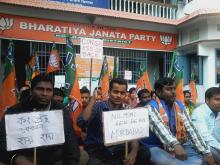 24 Aug 2010 - 7:25pm | editor
Charaipung still remains tense on Tuesday even as joint patrolling is on along the Assam-Arunachal Pradesh border. According to allegations, the Assam Government is not doing enough to protect its...