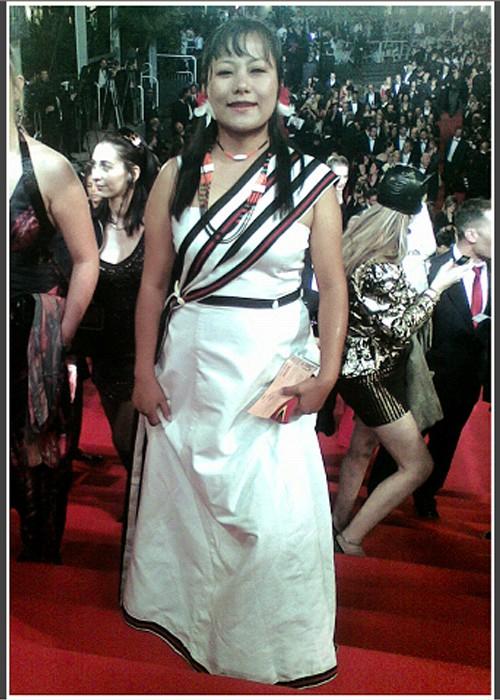 The recently selected LAST OF THE TATTOOED HEAD HUNTERS - a 15 minute film on the head hunting Konyak Nagas of northern Nagaland, produced by Hawksbill Production and presented by Dwijendra Chalachitra Pratisthan in the 63rd Cannes Film Festival was screened on 15th May 2010 with a large gathering.The film was given a loud applause from the audiences because of the rarity of the subject matter. The realistic making of the film created by director Vikeyeno Zao and the artistic cinematography by Indrajit Narayan Dev was a rare feat for the viewers at auditorium No: 3 at the The Grand Lumiere Theatre at Cannes. Viewers from US, Canada, Italy, France, UK, Isreal and a host of other celebrated dignitaries representing from different countries of the world were present at the screening.

This film has created a landmark in the history of films produced from the North East India. The Nagas, especially the Konyak Nagas are distinctively projected to the world with the regions' geography and its people. The film opens doors to the rest of world to know our people more and visit our lands.

Last of the tattooed head hunters is an attempt to capture the glorious head-hunting tradition of the Konyak Nagas. One of the fiercest among all the Naga tribes, the Konyak Nagas continued the practice till the end of the twentieth century. “The film is based on the ritualistic details connected with the head hunting tradition of the Konyaks, with attempts also being made to project their traditions and ancient customs. The principle reason for making this film is to tell the people about the tattooed head hunters before they are gone,” said Vikeyeno Zao.

Today, the Konyaks like most of the Naga tribes are Christians. With the advent of modernity into their lands the young generation have all but forgotten their past traditions and culture and are forward looking along with the rest of the world. However a dilemma faces these brave and hardy people today, and it is a political one. Vikeyeno explains, “In 1972, when the international border between India and Myanmar was demarcated, the border was drawn right through their villages, and even through their homes. No consideration was given to the rights of the Konyaks to live as one people in one country. Today their wish to live as a homogeneous tribe face an uncertain future. This documentary film aims to project the Konyaks in their homeland, their traditions and ancient customs and their plight today and a presentation to the world about these last tattooed Konyak Naga Tribes before they are gone forever.”

The screening of the film on the film in Cannes has also been featured prominently in the blog of eminent Paris-based media journalist Helen Dobrensky.

24 Sep 2015 - 7:48am | AT News
The Director General of Software Technology Parks of India (STPI) Omkar Rai has assured Arunachal Pradesh Chief Minister Nabam Tuki of centre at Itanagar at an earlier date.  Rai called on Tuki...