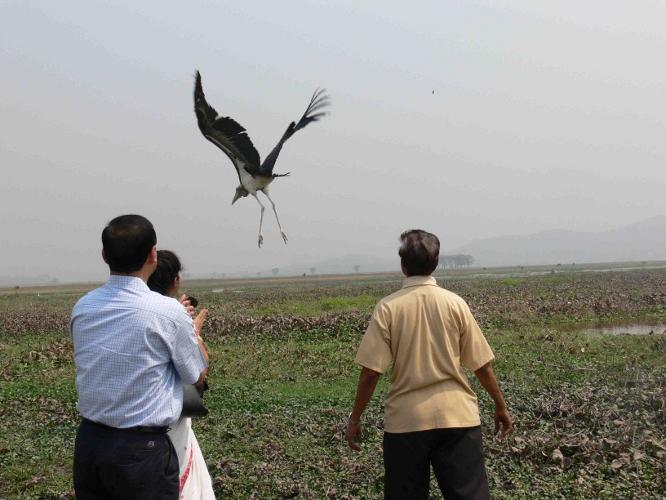 Phaguni, a greater adjutant found its natural home after one month stay as a special guest at the Assam State Zoo. It was released on 21 March after a grand farewell at Dodora village located 15 kms from Guwahati city, the birth place of the bird, by forest officials of the Assam forest department, Conservationists and the local villagers.

Phaguni a two month old greater adjutant was seriously injured, and was under treatment at the Assam state zoo for almost a month under the supervision of Dr. Bijoy Gogoi, veterinary surgeon posted at the Assam State zoo and Dr. Debojit Das, of the Rani Vulture Breeding Centre.

“The bird was found at a very critical stage, now it is perfectly fine. It was encouraging to see it fly after one month under treatment”, adds Das.

“Most likely the baby bird fell down from the tree where it was living under the supervision of its mother. It was found in a serious state on 23 February and has been under treatment and supervision since then”, says conservationist Purnima Barman, of the NGO Aaranyak who is pursuing a research on Greater Adjutant. “The breeding period is between September-March and this period a lot of Greater Adjutant dies by falling from the trees, last year there were 22 reported deaths.”, adds Barman.

Conservationists say they are alarmed at the reduction in the numbers of this endangered species. “The number of greater adjutant has gone down alarmingly. This ceremonious event followed by the farewell to the Adjutant, Phaguni was an effort to make the villagers aware of the importance of the bird”, says renowned Conservationist Bibhab Talukdar of Aaranyak.

Aaranyak had organised a meeting on March 21 at the house of Bapuram Das, the tree owner of the tree from which the bird fell down in February. “I was never aware of the importance of the Greater Adjutant bird, today I have taken a vow that I will always try to protect these birds”, said Das at the meeting He also praised Purnima Barman for her efforts to protect these birds and also making the villagers aware about how valuable these birds are for the nature. “Earlier the children in our village didn’t know about these birds, now they are always on the lookout for any Great Adjutant which might be in danger or need medical attention, and report these to the forest department”, adds Das.

Praising Aaranyak for their conservation efforts, DFO Narayan Mahanta said knowledge about nature is very important and it needs to penetrate into the rural areas. “Today we have taken only one small step, our goal is still far ahead and for that we need active cooperation from the villagers”, said Mahanta. “The concept and idea of the meeting followed by the release of the bird was excellent, also it was really productive as it involved the villagers in their locality”, said senior forest official George Ahmed after the event.

Permalink Submitted by Klaudiusz Gieron on Wed, 21/04/2010 - 06:21
It is so wonderful to read such good news and to see that the efforts of the zoologists to help these fascinating birds are successful. And it also makes me very happy to hear that people begin to make friends with the Adjutants. It is really a wonderful development and I hope each single colony of Adjutants will increase more and more. These animals are always on my mind.

A new dawn - the paris agreement enters into force!

4 Nov 2016 - 10:27am | Rituraj Phukan
Today represents a new dawn in the history of mankind. Future generations will remember 4th November 2016 as the day the Paris Agreement came into force. The threat of climate change has never been...

12 Oct 2014 - 11:27am | AT News
Tripura police remains clueless a day after suspected NLFT militants abducted 11 including 5 from Assam persons from Amchurmukh at gunpoint. Operation is going on to rescue the workers. But there...