Guwahati based Centre for Environment, Social and Policy Research (CESPR) is organising a day-long workshop for Journalists on Climate Change and Environment Reporting at Guwahati on September 8.

The Workshop will be held at the Conference hall of the Assam Science Society at Khanapara.

The Workshop will be addressed by several senior journalists and academicians, and will be attended by journalists from different parts of the North Eastern region.

During the second half of the day, there will be a discussion on, “Ownership and Corporatization of Media, and its impact on Environment and Climate Change Coverage”. The discussion will be attended by senior journalists, academician and researchers.

Anyone interested to take part in the workshop, or the discussion are requested to contact the organizers at the earliest, @ 9707185329, or via email, cesprindia.research@gmail.com

7 Mar 2016 - 12:53pm | AT News
By Sanjb Baruah If I were a Facebook user I would have surely clicked ‘like’ on the news that the Nationalist Socialist Council of Nagalim (Issak-Muivah) and the Government of India have reached a...

18 Aug 2012 - 3:55am | editor
Fresh violence is reported from Kokrajkhar where one more person was killed on Friday. According to report, unidentified miscreants shot dead a person at Kokrajhar. The shoot out took place at around... 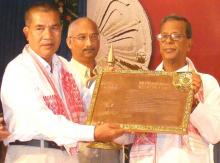