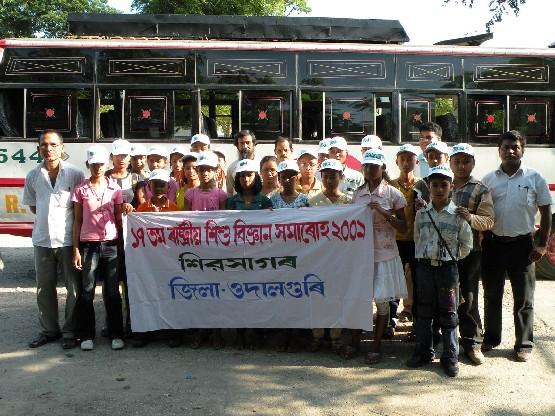 The young child scientists of Udalguri district ,who had attended the 17th National Children’s Science Congress(NCSC), Assam state session at Sivsagar Girls college from 12 to 15 October 2009 could very well draw peoples appreciation. Assam Science Technology and Environment Council, Guwahati organized the state NCSC meet at Sivsagar Girls Collgere to select 25 best science projects from the state for the national level meet to be held at Ahmedabad from December 27 to 31/2009. A 22 member child scientists team from Udalguri district had attended the state meet and presented 10 projects and one science working model on various sub-themes.

The project of 10 years old Atlanta Das ( group leader) and 10 years old Puja Rava (co-worker) of Arunodoi Academy ,Tangla have been selected for the national level meet and group leader Atlanta Das has qualified to represent Assam in the national level children’s science congress to be held at Ahmedabad from December 27 to 31/2009.The title of the project - “Aspects of Solar geyser in saving energy and nature”. Both of them prepared the project under the guidance of Tapas Das of Tangla.

A state level working science model competition was also held during the state meet at Sivsagar where Pradyumna Barua and Chayanika Baishya of Khagara High School (near Khoirabari) won third place and a cash amount of Rs.3000 amongst the districts of Assam.People of Udalguri have expressed satisfaction at the overall performance of young child scientists of the district.

Permalink Submitted by Man Singh on Sat, 07/11/2009 - 01:21
It is wonderful activity to keep science shining. Include survismeter in your science activities list for motivation of young minds.

29 Dec 2014 - 5:24pm | Hantigiri Narzary
Hundreds of people in Kokrajhar hit the streets on Monday in protest against NDFB-S violence and demanded measures to ensure their safety and security.  People in large number representing the...