In a very tragic and barbaric incident, Puspanjali Das (19)wife of Chandan Debnath of Thakuriapara village under Bhergaon sub-division in Udalguri district has been burnt down alive on Saturday noon for non-payment of marriage dowry. The incident has shocked the district.

The lady was put in a sac before thrown in a fire lighted in a heap of hay. Puspanjali was married to Chandan just three months bac. Narayan Debnath, father-in-law of Puspanjali has been arrested while trying to flee but all the family members managed to flee before being caught. Pranjal Bora, SDPO, Bhergaon told Assam Times that none involved in the incident would be spared.

17 Aug 2015 - 7:58pm | Hantigiri Narzary
The All Bodo Women Welfare Federation is unhappy with Kochugaon police for failing to arrest the two army jawans who allegedly raped a local woman inside a school building.Addressing a press... 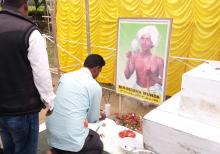 Homage to Birsha Munda in Kokrajhar