A day after recruiting 13 new parliamentary secretaries chief minister Tarun Gogoi is set to induct two minister afresh in is cabinet. The beneficiaries are Gautom Roy and Siddique Ahmed.

Gogoi is understood to have told the duo over telephone on Monday. Governor PB Acharya will administer oath of office and secrecy to both Roy and Ahmed on Wednesday.

The 13 parliamentary secretaries will take oath from the chief minister in the same function at the Raj Bhawan. Siddique, the close associate of Dr Himanta Biswa Sarma was shunted out last year after Dr Sama resigned before the governor. Later Roy, who was a loyalist of the dissident camp was axed when Gogoi reshuffled his cabinet.

18 Aug 2010 - 1:00am | Mowsam Hazarika
A subsidiary of the central ministry of coal in Assam is steadily refusing to compensate for crop damages wrought by its open-cast mining. This is after the Gauhati High Court told the company to pay...

26 Jun 2009 - 12:00am | Nava Thakuria
Guwahati Press Club has announced a series of media fellowships for the benefit of the journalists of Assam. The fellowship is introduced in the memory of Bir Sing Majhi and has been sponsored by... 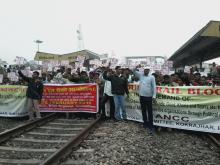