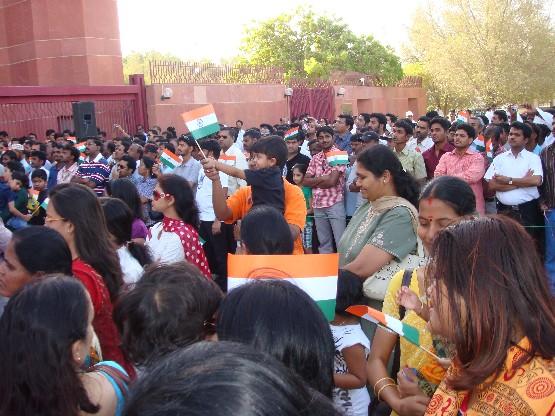 Inquisitiveness, curiosity n proudness filled me as I got ready to attend the 62nd Independence Day at Indian Embassy,Kuwait. As we drove to the Embassy at 6.30am to reach and be part of the flag hoisting at 7.10am ,my mind was filled with different thoughts…thoughts of the many Indenpence Day we celebrated in our motherland Assam under the shadow of Assam Bandh . My one year daughter too wake up early that day as if she understood the importance of this special day. As we approach’d the embassy my husband park’d our car atleast 1km from the embassy as there was no space as hundreds of cars were already parked. As we came near the embassy we were pleasantly surprised to see hundreds of Indians from different walks of life and some like me with infants. People had Indian Flags in their hands. I felt so happy and proud when my infant daughter too took a flag and was waving. Jai Hind, Jai Bharat, Mera Bharat Mahan echoed in the air. The “Borah Drummers”, the members are Guajarati Muslims exhibited their talent and skills. Small school children and Doctors community sang patriotic songs. The Indian Ambassador Ajai Malhotra hosted the national tri-colour flag as we all stood there with proudness. He read out the Prime Minister of India Dr Manmohan Singh’s message ,the speech which he gave to millions of Indians from the Red Fort .He also read out the various facilities and schemes that the embassy has taken for thousands of Indian workers. After the cultural programme was over ,the Ambassador met the common people and listen to their grievances if any. Deep feeling of proudness enveloped thousands who gathered there to be part of such a celebration. Mughal Mahal, a famous Indian restaurant gave free breakfast (paratha,chola,sweets) to thousands of people who gathered . Free supplements on Independence Day were distributed by The Times(Kuwait’s premier weekly newspaper) and Arab Times(Kuwait’s national daily).

In a foreign country that too in a Middle East Muslim country like Kuwait we celebrated it so much fun, proudness and most importantly without fear, then why not in our motherland Assam??Can’t we be like rest of India and foreign countries in observing our Independence Day???When will such a day come???These thoughts filled my mind as we drove back home.

I remembered Jawaharlal Nehru’s Independence Day speech…. "Long years ago we made a tryst with destiny, and now the time comes when we will redeem our pledge, not wholly or in full measure, but very substantially. At the stroke of the midnight hour, when the world sleeps, India will awake to life and freedom. A moment comes, which comes but rarely in history, when we step out from the old to the new, when an age ends and when the soul of a nation, long suppressed, finds utterance.... We end today a period of ill fortune, and India discovers herself again."

Its time for us, all assamese people to defy the Bandh and celebrate it with love, fun and frolic.

Permalink Submitted by SKumar on Mon, 07/09/2009 - 06:37
The Ambassador infact read out the President of India's message and not the Prime Minister's. Anyhow thanks to Parimita for sharing her thoughts. We too feel proud like her to be part of the celebrations of our great nation.

Permalink Submitted by Chintu Nath on Mon, 07/09/2009 - 14:59
Pom-ba, it was a great coverage for us to know about how NRIs feel about their country and Independence. We Indians are actually, patriotic by birth; it is in our subconscious to feel great and own about our country. No matter where we live in heart we are always INDIANS, and the whole world today recognizes that.We must always endeavor to do better than before wherever we are, and mere that doing only will take our nation even higher and greater. Vande Mataram.

29 Sep 2015 - 5:52am | Jackson Tayeng
Papum Pare Deputy Commissioner Tai Kaye reviewed the development schemes and law and order situation of the district at a meeting of administrative officers in Itanagar on Monday.Kaye called upon the...