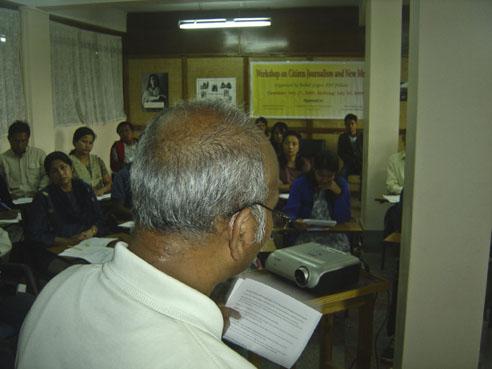 Citizen Journalism (CJ) and application of new media technology are the new age of communicating issues that impact lives of people on a daily basis. This message on plural and a more democratic media emerged out of a series of recently concluded CJ training workshops. Organised by Babul Gogoi, a proponent of new media, and supported by Panos South Asia (PSA), Impulse NGO Network (INGON) and Foundation for People’s Empowerment (FPE), the workshops were held on July 27 and 29 in Guwahati and Shillong respectively.

In training 60 participants in both the locations, the workshops aimed at popularising CJ with people from all walks of life and demonstrating the use of new media tools for the same. “With the spread of the Internet and mobile phones, communication of information have become much easier and faster. This, and the fact that the pre-existence of these tools with people does not impose any additional cost, make them ideal for low cost, plural and widespread network of information. It is of the people, by the people, for the people,” said Gogoi, a creator of several websites on Assam and other parts of Northeast India with an aim to promote CJ.

Kazu Ahmed of PSA was the main trainer at the workshops and covered a range of issues from basics of journalism to professionalism and ethics. “Information has reached a stage where it has virtually wrestled in beside our daily needs such as food and water. While conventional media may not necessarily address issues pertaining small areas or communities and significantly impact their lives, CJ can turn this order upside down. Now information can be generated locally and communicated globally. This can revolutionise the generation and consumption of information at local levels and for local benefits. This can also influence greater accountability in governance, knowledge production at local levels with a larger reach and contribute greatly towards a more informed society", he said.

Jugal Kalita, Professor of Computer Sciences at the Colorado Springs
University, in conversation with participants at the Citizen
Journalism workshop in Guwahati on July 27.

Participants, who ranged from teachers and accountants to social workers, worked with this idea through thematic and technical sessions at the workshops. The former comprised discussions on the key features of CJ, basic skills in journalism and ethics. In the latter, there were demonstrations of tools of new media such as the Internet, mobiles phones and their usage through blogs, websites, sound and visuals, text messages and so on. The trainings also had practical sessions where participants were asked to produce journalistic works in various formats such as news stories, interviews and audio recordings. According to Gogoi, all these will be available at www.assamtimes.org, a CJ website created and maintained by him.

Professionals from the media and advocacy organisations also imparted their knowledge and experiences with the participants. Utpal Baruah from the Guwahati based photo agency UB photos talked about the basics of photojournalism. Billy Peter Domes, editor of Khasi daily Dongmusa, interacted with trainees on the tenets of journalism. Hasina Kharbih of INGON shared her experiences in sensitising the media about issues such as HIV/AIDS. Sushmita Kashyap, a freelance researcher and media person, spoke about the use of other forms of media such as theatre and performances. A K Srivastava, Principal Secretary, Department of Transport and Information Technology of the Meghalaya government attended the Shillong workshop. He professed to have started engaging with this form of alternative media himself and stated that the Meghalaya government’s decision to set up 200 Common Services Centres across the state should be availed by anyone intending to use them to access the Internet even in rural areas. Prominent personalities such as Dr. Jayanta Madhav, Economic Adviser to the Chief Minister of Assam, and Ketaki Bordoloi, Executive Director of Foundation for Social Transformation (FST), attended the event at Guwahati. Dr. Jugal Kalita, Professor of Computer Sciences at the Colorado Springs University also joined in at both the workshops through Skype, an Internet video conferencing tool.

CJ, that also has aliases of participatory journalism, civic journalism, street journalism etc., first emerged as a concept during the 1988 presidential elections of the United States when people including media persons sought information that was not influenced by vested interests or political affiliations. It is now of phenomenal popularity and use among masses across the world. One can find hundreds of CJ websites that are being used by everyone from representatives of people to just about anyone aspiring to make a change. It could be mentioned here that Gogoi organised these workshops as a part of a fellowship he was awarded by the Foundation for Social Transformation (FST), a grant-making agency supporting individuals and collectives working on social change.

30 Jul 2020 - 5:49pm | Prasenjit Saha
Agartala: Chief Minister Biplab Kumar Deb announced the decision on Wednesday evening and said the measure was needed to check the spread of infections and complete an ongoing door-to-door...

9 May 2013 - 10:28pm | AT News
Maize farmers in Bongaigaon district threatened to commit suicide in protest against the spurious quality of maize seeds distributed to them by the state government.The maize plants bloomed fully in...