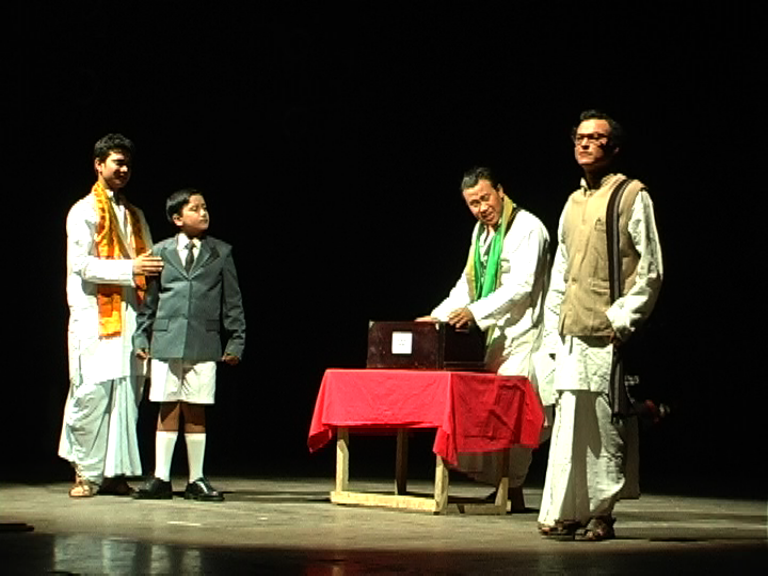 Though the voice of Assam, Axom Ratna Dr Bhupen Hazarika is not with us physically but he is ever alive in the mind and heart of every Assamese. Gandharba, institute of acting and music of Maligaon, Guwahati staged a drama “Moi aru Mur Saa-Jonotar Kontha ” (Me and My Shadow-The Voice of the Public) at Rabindra Bhawan on April 1 to give tribute to the legendary singer. The drama was based on Dr Hazarika's life and his great creations. Every scene from his childhood to old age, his conflict of life showed vividly in the drama. His relation with Jyoti Prasad Agarwalla, Bishnu Prasad Rabha and Phani Sarma was also depicted in the drama.The plus point of the drama was that necessary scenes were showed in the back screen with the help of projector.

Use of Bhupen Hazarika's melodious songs in the drama were an another attraction of the drama. The concept of the drama was Dhrubajyoti Kumar and written and directed by NSD graduate Binod Sarma. The character of Bhupaen Hazarika(child) casted by Kumar Sanjay Krishna,Bhupen Hazarika( young)-Binod Sarma,Bhupan Hazarika(old)- Monuj Das, Jyoti Prasad Agarwalla-Prasanta Das, Phani Sarma-Jagadish Deka,Bishnu Rabha-Bharasta Dhruba Madur.The length of the drama was about three hour and it seemed that all the audience enjoyed every moment of the drama.Dr Hazarika's son Mr Tez Hazarika was also present there as a chief guest and enjoyed the drama.

5 Jan 2018 - 8:17pm | AT News
Shillong: Meghalaya Chief Minister Mukul Sangma launched the Women Economic Empowerment through Financial Inclusion and Entrepreneurship at U Soso Tham Auditorium in Shillong on Friday. In...

27 Jan 2013 - 10:31pm | AT News
Guwahati police claimed to have arrested a gang of notorious kidnappers I connection with the kidnap of a Guwahati-based hotelier’s son two months ago.Police on Saturday night arrested five persons...

24 Jul 2007 - 9:14am | editor
Guwahati : AASU had called for a Rail Abarodh on Tuesday between 11 am to 3 pm. Trains services were disrupted in Guwahati, Lumding, Lakua, Sarupathar, Kokrajhar and various other places in Assam....